In this Viewpoints, Heather Issvoran interviews former Department of Homeland Security acting secretary Chad Wolf. Wolf discusses his experience leading the department for four years, including what all DHS does, as well as the policies, strategies, opportunities, and challenges that were implemented and pursued while he was there. While at DHS, Wolf oversaw the response to historic hurricane and wildfire seasons, immigration and border security challenges, and counter-terrorism issues, among other initiatives. Wolf, who started his public service career as a U.S. Senate legislative aide more than two decades ago, was evacuated from the Senate Office Building during the morning of 9/11 and says that experience had a profound effect on his professional outlook. He joined the newly formed Transportation Safety Administration shortly afterward in early 2002 and is now president of Wolf Global Advisors. 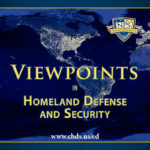