Preparing to Protect the Home Front

As we transition into the second half of hurricane season, parts of the country are still recovering from record flooding and devastating tornadoes. Hurricane season unofficially runs through November and the National Oceanic and Atmospheric Administration (NOAA) recently warned that “above-normal hurricane activity” has been predicted for the remainder of hurricane season.

The National Guard plays a crucial role in preparing for and recovering from hurricanes and other major disasters. While we might usually equate the National Guard with recovery operations on the home front, they are continuously training and preparing to handle a variety of emergency situations. Proper training is a crucial element of the National Guard’s success. In fact, there are over 5,000 airmen and soldiers positioned throughout the Gulf, Caribbean, and Atlantic coastlines and prepared to respond to natural or manmade disasters, Chemical, Biological, Radiological, and Nuclear Response Enterprise (CBRNE) incidents, and even cyber-attacks. 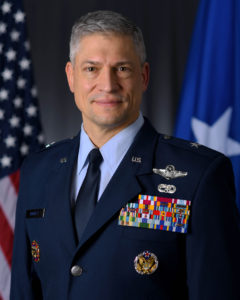 One of the leaders charged with preparing the troops for these diverse missions is Center for Homeland Defense and Security (CHDS) master’s graduate, Jeffrey Burkett. Brigadier General Burkett is an accomplished commander who has led at the National Guard’s Group, Wing, and Joint Task Force levels while serving with distinction on multiple combat tours. Burkett is currently the Vice Director of Domestic Operations for the National Guard Bureau and credits his CHDS education as “invaluable in what I have been doing since graduating. Everything I approach is influenced by having a greater appreciation of the other homeland security partners. Applying the intellectual rigor honed in Monterey to complex problems is a huge benefit to what I do today.”

Initially commissioned in 1990 through the ROTC of Cadets at the Virginia Polytechnic Institute & State University, Burkett spent a decade flying on active duty. During this time, he held various positions at the squadron and group levels, including commanding the Prime Nuclear Airlift Force (PNAF). The PNAF flies nuclear weapons and their components to military bases around the globe. In 2000, he joined the Air National Guard, and in 2003 he was selected to serve at U.S. Northern Command where he spent time in the Canadian-U.S. Bi-National Planning Group developing strategic defense policy. Burkett also served as a National Guard Advisor improving homeland defense programs and coordination. 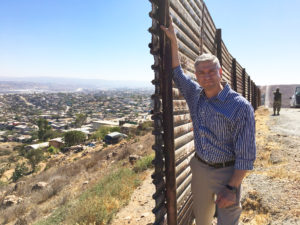 Brigadier General Burkett during a recent survey of the Southwest border. Photo courtesy of Burkett.

Homeland security has always been an integral part of Burkett’s responsibilities. But he decided to expand his operational knowledge of the homeland security enterprise by entering the CHDS master’s degree program in 2004 (cohort MA0401/0402). He subsequently graduated the following year. His master’s thesis, titled “Opening the Mexican Door: Continental Defense Cooperation,” focuses on U.S.-Mexican security challenges and argues that a bilateral transnational emergency management framework can serve as the cornerstone of North American defense by incorporating a civil-military partnership. Burkett was honored with the Philip Zimbardo Award for his thesis research. The Philip Zimbardo Award honors the student who demonstrates the best understanding of the psychological aspects of terrorism and whose performance in the master’s program embodies the highest levels of academic achievement. The honor is named after Stanford University psychologist and Professor Emeritus Philip Zimbardo, who also taught at CHDS. “It is simply an amazing organization for national and domestic security. Not only does it connect citizens to the defense of the nation, but it also delivers extremely high national security return on investment and enormous capacity and capability,” Burkett shared.

Back on the home front, Burkett is focused on making sure his men and women are prepared to activate at a moment’s notice. That means extensive training and exercises for hundreds of units spread across the country. The diverse missions they handle accentuates the level of coordination required by Burkett’s position. Most units run their own local exercises, manage their own activation communications process, and identify the units to respond to events in every region of the country. That includes units whose members may become victims of disasters themselves too. 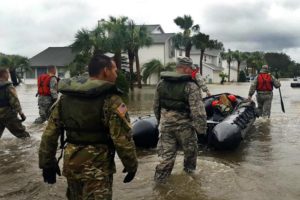 Part of Burkett’s coordination plan is guided by principles he developed at CHDS. “My classmates were an amazing group that represented a wide range of the homeland security enterprise from police chiefs to FBI agents to FEMA officials to firefighters and other emergency responders.” Collaboration and communication is a key component of emergency preparedness. While the National Guard troops are continuously training, they are also establishing local response networks for “when” (not “if”) they are called upon. The coordinated response to emergencies begins at the local level. Local authorities form the first line of defense in the case of disasters while the National Guard acts as the calvary. “We step in when local law enforcement, emergency responders, and public health teams are overwhelmed or need specific forms of support,” echoed Burkett.

The last few years have seen a high frequency of natural disasters. The National Guard continues to prepare by introducing more robust planning that anticipates what resources they may need and who to contact in every contingency. Which, again, speaks to the skills Burkett honed while at CHDS. “The people you meet in the program, and even later as an alumnus, are doing things that are extremely important,” Burkett said. “You can’t put a price on that, especially when you share a passion for our nation’s security.”