D. Jeremy DeMar is an excellent speaker. Not just because he speaks loudly and projects his voice clearly, but because he has extensive experience speaking with the public during times of crises as an emergency dispatcher, firefighter, and emergency medical technician. That’s part of the reason he was selected to represent fellow public safety telecommunicators at a press conference introducing the 911 Saves Act.

Center for Homeland Defense and Security (CHDS) master’s graduate D. Jeremy DeMar, Director of Springfield Emergency Communications (SEC) in Massachusetts, was invited to Washington, D.C. to speak in support of the 911 Saves Act. The Act seeks to reclassify public safety telecommunicators as ‘Protective Service Occupations’ in the Office of Management and Budget Standard Occupational Classification. These occupations are currently classified as administrative or clerical jobs, which doesn’t accurately represent the lifesaving work and dedication of these professionals. DeMar shared some insight, “The types of calls we deal with can produce vicarious trauma, secondary stress, and episodes of PTSD. On any given day, you never know what’s going to be on the other end of that phone line.” 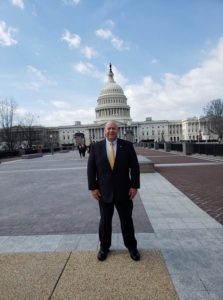 To rally support for this zero-cost legislative fix, a press conference was held at the House Triangle of the United States Capitol in Washington, DC. The main drivers behind the 911 Saves Act are U.S. Representatives Norma Torres (CA-35) and Brian Fitzpatrick (PA-1). Torres is the only former 9-1-1 dispatcher serving in Congress and Fitzpatrick is a former Federal Bureau of Investigation (FBI) Special Agent and federal prosecutor. “I know first-hand the challenges our public safety dispatchers face, the stress they are put under, and the importance of their work.” Torres shared. Also in attendance to introduce the bipartisan bill were U.S. Representatives Ro Khanna (CA-17), Donna Shalala (FL-27), Federal Communications Commissioner Jessica Rosenworcel and other leading public safety industry experts.

One of his main goals is to establish dispatch systems and technology that benefit residents and first responders. The 911 Saves Act is aligned perfectly with this goal. “9-1-1 professionals are an integral part of the public safety process nationally, and here in Springfield. The ‘9-1-1 Saves Act’ serves to officially recognize the critical services these unsung heroes provide daily to our citizens and first responders,” said DeMar.

To fully illustrate the demanding nature of dispatcher responsibilities, DeMar is also contributing to a survey that researches the critical stress experienced by dispatchers in public safety and emergency communications. The survey incorporates the point of view of dispatchers’ families and close friends. It is titled the 911 Family Impact Study and the anonymous 10-question survey is seeking immediate family members, spouses and close friends of current and retired 911 telecommunicators to participate. 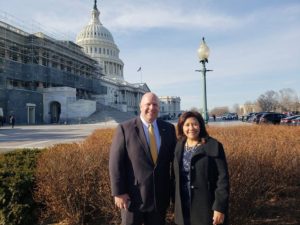 The purpose of the study is to gain greater understanding of what effects the profession may have on the social and psychological aspects of dispatcher lives. The survey, launched March 1st, asks participants about the impact their family member’s dispatcher job has had on interactions with family and close friends. Partnering with DeMar on the 911 Family Impact Study are Elizabeth Belmonte, training supervisor with Cambridge Emergency Communications, Anne Camaro, assistant director of administration and training for Cambridge Emergency Communications, and Adam Timm, founder of The Healthy Dispatcher and former 911 operator with Los Angeles Police Department. When the study concludes later this year, the researchers will release results and materials in order to promote workshops and inform dispatcher training nationwide.

The push to reclassify public safety telecommunicators has been supported by the Association of Public-Safety Communications Officials (APCO) and the National Emergency Number Association (NENA) for years, but it’s finally gaining momentum on a legislative level thanks to the 911 Saves Act. And, DeMar is excited to be a part of the progressive solution, “Based on the service we’re providing, we’re the first line of emergency response. Dispatchers are an important link in the chain that connects the public with first responders. So, for us, the reclassification is an obvious slam dunk. There’s no reason why they shouldn’t be considered a protective service—especially, with the evolution of technology and the way the program has changed, I don’t think anybody would label the type of work as clerical.”

DeMar first met Congresswoman Torres through the Massachusetts Communications Supervisors Association (MCSA), where he serves as a regional Vice President. During the NENA-sponsored 911 Goes to Washington event, Torres was kind enough to accept a spur-of-the-moment meeting with MCSA President Christopher Campbell and she was very interested in the push for reclassification. The 911 Goes to Washington event culminated in a conference that brought together professional telecommunicators and national policymakers to discuss emergency communications issues and policy challenges facing public safety. After deciding to introduce the legislation, she reached out to MCSA and asked if they would be willing to send some representatives to attend the 911 Saves Act press conference in Washington. Also in attendance from the MCSA were Charles Robert Goodwin, Lee Ann Delp, and Erin Weldon Hastings. DeMar added, “It was a great opportunity to go out there and talk with our representatives. Congresswoman Torres and Congressman Fitzpatrick are both very much committed to seeing this bill move forward.” 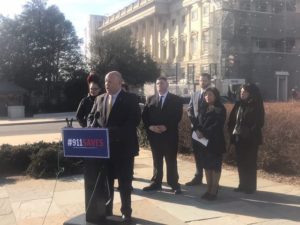 There’s also a direct correlation between his master’s thesis research and the 911 Saves Act. His thesis, Next Generation 9-1-1: Policy Implications of Incident Related Imagery on the Public Safety Answering Point, emphasized the evolution of the public safety telecommunicator profession—specifically, the arrival of incident-related imagery. As the Next Generation 9-1-1 (NG9-1-1) system becomes implemented nationally, it will change the way in which 9-1-1 calls are processed—allowing callers to send images, video, and other media directly to 9-1-1 dispatchers. “Our profession for the previous fifty-plus years was focused on listening. And suddenly, we’re going to be plunged into this situation where we are exposed to graphic images or videos. What is the impact going to be?” DeMar wondered. Current CHDS master’s student, Kevin Haight, Captain of Statewide Emergency Communications for Idaho State Police, is doing similar research for his thesis. By way of reclassification, the Act opens up many different support mechanisms that law enforcement and fire service professionals already have access to. This would help dispatchers dealing with critical-incident stress or PTSD, and it could potentially enhance recruitment and retention of dispatchers as well.

If we truly want to support the public safety telecommunicators who form a critical lifeline between the general public and first responders, we need to provide them with the resources to perform at the highest level. DeMar added, “There’s not enough dialogue about 911 dispatchers; we need to continue having these discussions to fully understand the side-effects of stress in this profession. The 911 Saves Act goes a long way towards bridging the gap in resources.”