On 19 March, Center for Homeland Defense and Security (CHDS) Professor Dr. Cristiana (Cris) Matei was presented with the LCDR David L. Williams Outstanding Professor Award. Each quarter, the award is bestowed upon a Naval Postgraduate School (NPS) faculty member who has demonstrated the greatest dedication to the learning and intellectual growth of students, in-residence and abroad. While most people already know Dr. Matei is a wonderfully-effective instructor and thesis advisor who speaks multiple foreign languages, only a few know that she learned to speak one of those languages in college, Spanish, by watching television—specifically Telenovelas (commonly known as Latin American soap operas). 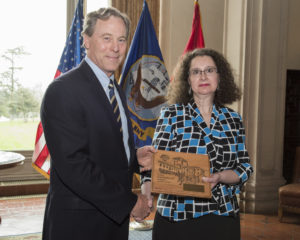 The award is certainly well-deserved, but Dr. Matei humbly deflected credit to her students and colleagues when speaking about the award, “I love working with our students because I have learned so much from them. It makes it my job feel so much more rewarding and I appreciate the relationships we develop.” She is an expert on many relevant homeland security topics but her expertise really shines when speaking about the role of security and intelligence in democratic and non-democratic governance. CHDS Senior Lecturer and Master’s program Academic Associate, Dr. Carolyn Halladay, supported her qualification for winning the Outstanding Professor Award by stating, “Cris brings so much to the CHDS master’s classroom. On the one hand, she has deep knowledge in her formal fields of expertise—civil-military relations, intelligence and intelligence reform, and Latin America. On the other hand, she remains entirely open to learning new things and experimenting with new approaches in her teaching, so she fits right in with the best of our faculty.” Previous award winners from CHDS include Glen Woodbury, Carolyn Halladay, Rodrigo Nieto-Gomez, Nadav Morag, Robert Simeral, David Tucker, Richard Bergin, Chris Bellavita, Anders Strindberg, David Brannan, Greta Marlatt, Jodi Styles, and Erik Dahl.

Before arriving at the Center, Matei earned a Ph.D. in War Studies from the King’s College at University of London, a M.A. in International Security Affairs from the Naval Postgraduate School, and a B.S. in Physics (Nuclear Interactions and Elementary Particles) from the University of Bucharest, Romania. Dr. Matei has been contributing to the NPS community since 2003 when she was brought onboard as a foreign national contractor for the Center for Civil-Military Relations (CCMR). She was eventually promoted to a Lecturer position where she would go on to research, publish materials, and teach courses on a wide range of topics including democratization, intelligence and counter-intelligence theory, and transnational security challenges. Dr. Halladay also worked with Matei at CCMR, “We both started our NPS careers at CCMR—thanks, in part, to the boundless support of the late Rich Hoffman. She organized executive courses on campus and overseas and then went and taught in them, so she knows a fair bit about educating busy, curious, diverse professionals with demanding day jobs and a certain amount of pre-existing expertise. She looks forward to the reciprocal flows of knowledge and learning that go on in such courses.” Matei currently serves as Program Manager of CCMR’s Intelligence & Democracy program and Latin America Regional program, in addition to teaching at the National Security Affairs (NSA) department. Dr. Matei actually won the Outstanding Professor Award in 2013 for her work with CCMR. 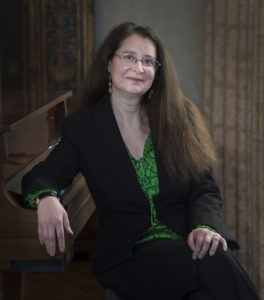 In 2015, Dr. Matei was offered a position with CHDS where she became a thesis advisor and co-taught the Special Topics course with instructors Dr. Carolyn Halladay and Lynda Peters. According to Peters, who is also a CHDS master’s alum (MA1101/1102), Matei has a knack for engaging students in the classroom, “Cris is an expert in this field and her passion for the topic truly influences our students’ approach to it. She has a catalogue of knowledge at her fingertips, which she can seamlessly weave into discussions, and she willingly shares her firsthand experiences living in communist Romania. Cris’s dedication to learning, critical thinking and challenging preconceptions motivates the students to do likewise.”

The Special Topics course, American Government for Homeland Security (NS4239), is intel-oriented and the curricula is right in her wheelhouse. Part of the course requires students to partake in a mock scenario where they deal with the fallout of a deconsolidated democracy. “Intelligence is often the first line of defense against threats to national security and as a homeland security professional you cannot separate yourself from that intelligence,” Matei added. She also enjoys her role as a thesis advisor and the students truly appreciate her assistance. One of the first theses she advised on was Chris Tubbs’ thesis titled “Conditions of Democratic Erosion: Has U.S. Democracy Reached a Tipping Point?” Tubbs currently serves as Fire Chief of Southern Marin Fire District and is also an alumnus of the Executive Leaders Program (ELP1302). When asked about Dr. Matei’s influence on his educational journey, Tubbs praised her ability to provide expert assistance, “I have long had an interest in the U.S. Constitution and Bill of Rights. Given the current U.S. political environment, writing my thesis about our democracy was a logical choice for me. I was blessed to be connected to Dr. Matei, an expert on democracy, early in my thesis process. I could not have been more fortunate to have partnered with Dr. Matei as one of my thesis advisors. As a student navigating the challenging process of researching and writing a thesis, having an advisor who is highly responsive throughout the thesis process, and personally invested in your project is an amazing gift. Dr. Matei was such an advisor and her personal background and knowledge of democracy played a crucial role in my thesis. In addition to her professional expertise and her personal investment in my thesis, Dr. Matei is a genuinely gracious and sweet person who supported this student’s process of learning and writing, a gift I am exceedingly grateful for.” 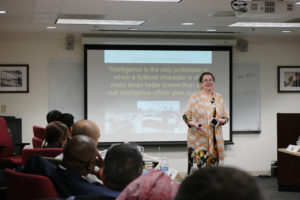 Dr. Matei in the classroom

As a world traveler, CHDS students benefit greatly from her international network of professionals. One such example is her participation in the International Studies Association (ISA) where she serves as Program Chair for the Intelligence Studies Section. Dr. Matei will be contributing to the ISA annual conference next week in Toronto as a panel chair, discussant, and presenter. Her presentation topic is “Intelligence Democratization in post‐Arab Spring Tunisia: Challenges and Opportunities,” which she co-authored with NSA faculty Jumana Kawar. Browsing the conference agenda reveals a handful of other CHDS participants: Professor Erik Dahl will be chairing multiple panels at the conference, while Professor Anne Clunan and Senior Lecturer Wade Huntley will be participating as discussion panelists.

CHDS students and programs also benefit from Dr. Matei’s dedication to the International Journal of Intelligence and CounterIntelligence. The prominent journal has published several of her original articles but she has also added to the journal’s talent pool by inviting scholars and intelligence practitioners from all over the world to contribute their research—some of whom are CHDS faculty. In addition to contributing content, Dr. Matei has served as a member of the publication’s Editorial Advisory Board since 2013.

When asked about the future security threats our democracy faces, Dr. Matei cited the field of cyber security as one that needs to be monitored. The potential for increase in nationalism is also something that requires consideration. But overall, “we just need to remain vigilant.” 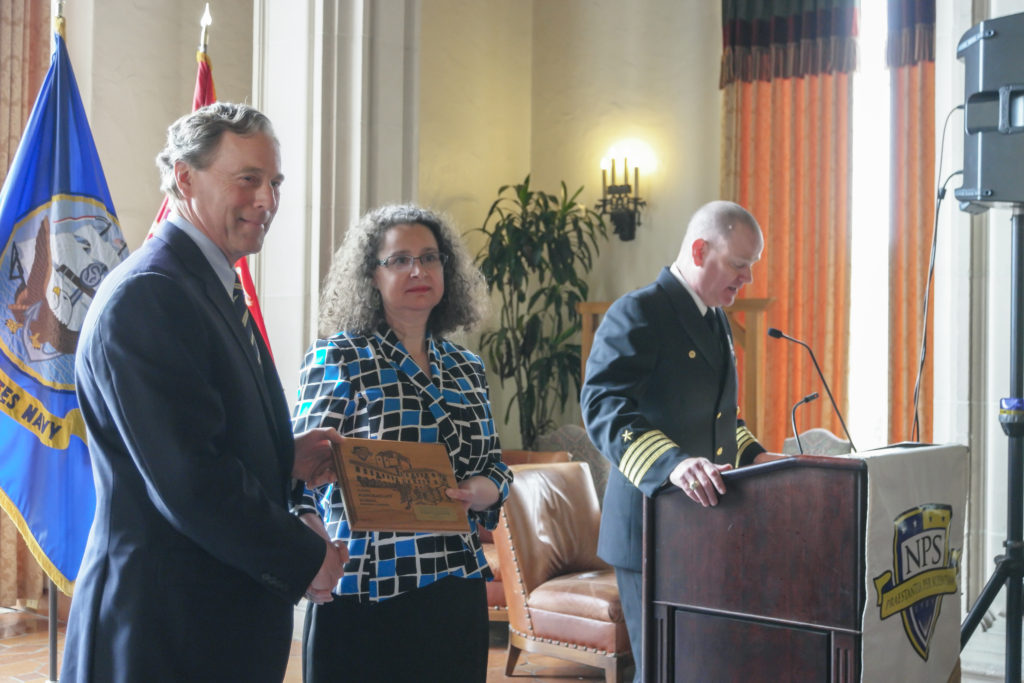