NPS-CHDS alumni go behind the scenes at Port of Miami

The Center for Homeland Defense and Security (CHDS) academic programs promote collaboration among leaders both during and after completion of their CHDS programs. One of the main ways students keep in touch is by joining a regional chapter of the alumni network. Twenty-one regional chapters have been established by former students across the country. 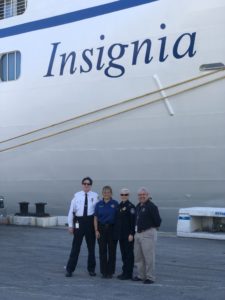 Recently, alumni from the Southern Florida chapter organized a behind-the-scenes tour of Miami Seaport. The event was organized by Deanna Kralick and Romeo Lavarias. Both are graduates from the CHDS master’s program (Kralick is from cohort CA1505/1506 and Lavarias is from NCR1103/1104). The group who attended was given special access thanks in part to Kralick’s connections. She is currently serving as Chief of Staff for the Office of the Director, Field Operations in the Miami and Tampa Field Offices with U.S. Customs Border Protection—but she started her career at the Miami Seaport. Lavarias is the Emergency Manager for City of Miramar in Florida. The event was Kralick’s idea, but Lavarias spearheaded the conversation and encouraged other alumni to attend.

The group was comprised of alumni from the CHDS master’s program and Executive Leaders Program (ELP) and represented a wide range of homeland security disciplines, from border protection to fire & rescue services to local emergency managers. Lavarias alluded to the benefits of a multidisciplinary group, “Even though we may not all be in the same line of work, we are in the same industry and can learn from others then apply to our own local ops. There is a lot of crossover in the form of emergency response and how CBP performs.” Different fields coming together allows them to see slightly different aspects and many were surprised by the volume and complexity of CBP responsibilities. At the Miami Seaport, CBP officers are tasked with juggling many different types of missions. “They are one of the only CBP groups that run their own forklifts and use chainsaws to really get into the ship; this gives them an advantage because it provides a better understanding of the ops,” Kralick added. 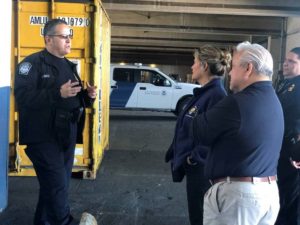 Upon arrival at the Seaport, the alumni were introduced to with Port Director Jorge Roig and other senior managers who oversee the facilities. The first part of the tour included access to observe the disembarkation of Carnival Victor (a large passenger cruise ship). According to Kralick, “CBP officials at the port were kind enough to let us see the processing of a cruise vessel arriving from across the Atlantic on the passenger side.” Discussion of cruise ship inspection procedures focused on general vetting of cruise ships and agriculture inspections of arriving cruise ships. One of the alumni in attendance, Fire Chief for Boca Raton Fire Rescue Services and ELP alumnus, Thomas Wood, shared “I boarded a Royal Caribbean ship there two months ago…now I can see what goes on behind the scenes.” 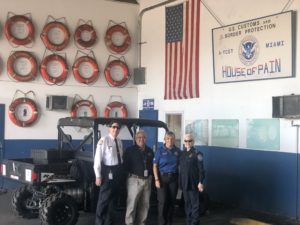 The second part of the tour explored tactical cargo operations that are employed by CBP at the port. This included discussions on the topics of targeting, container inspections, and use of Non-Intrusive Inspection (NII) Equipment. An overview of agriculture inspections in the maritime environment was particularly insightful as the group learned more about the general trade environment. But the highlight of the event may have been their exclusive tour of the infamous House of Pain and drug museum. Due to the large amount of illegal contraband that smugglers attempt to bring through port, CBP officials are constantly learning about and implementing new tactics to thwart these enterprising criminals. Lavarias emphasized the benefit of viewing and discussing the CBP’s innovative tactics, “Homeland security is constantly changing and we need to break out of our silos if we want to stay ahead of the bad guys.”