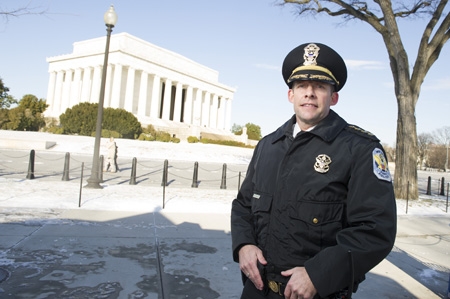 U.S. Park Police Chief Robert MacLean stands before one of the nation’s historical icons his agency is in charge of protecting. Photo taken by: Chet Susslin, Staff Photographer for National Journal

U.S. Park Police Chief Robert MacLean and approximately 700 employees he oversees are tasked with a mission that goes well beyond enforcing the law — protecting some of the nation’s most cherished symbols of democracy.

A graduate of the Center for Homeland Defense and Security Executive Leaders Program and 23-year veteran of the Park Police, MacLean assumed the top post in December after serving as Deputy Chief. The agency has jurisdiction in the District of Columbia, New York City and San Francisco where officers patrol historic sites such as the Statue of Liberty, the Golden Gate Bridge National Recreation Area and monuments in the nation’s capital. The Park Police is a part of the National Park Service

“I really challenge our employees and our partners to step back and look at what we protect as a nation, to look at our internationally recognized symbols of democracy,” MacLean said in a recent phone interview with CHDS. “Those are the symbols of what we stand for as a country and as a community. It makes you proud of what you do when you understand what you do doesn’t just impact the local community but the entire country.”

The department functions like any traditional policing agency in addressing crime issues, including environmental infractions, as well as specialized units. While covering law enforcement basics, it guards treasures that by nature are high-profile targets for terrorists’ attacks. MacLean has first-hand experience on what it takes to safeguard them having worked a stint as commander of the agency’s Homeland Security Division tasked with its Icon Protection mission, during which  he oversaw the department’s New York field office and its DC operations. The post enabled him to observe what types of measures are most effective, from using Closed Circuit Television (CCTV) to visitor screening techniques.

One of the greatest challenges in that mission is communication across the disparate geographies the agency is responsible for, MacLean noted, while also communicating with the department’s varied partners.

While defending national monuments, the force also fights crime in the adjacent urban park interface within its jurisdiction. Because those areas are heavily populated and multiple law enforcement agencies work nearby, interagency cooperation is indispensible.

That was illustrated during the response to the September 2013 Navy Yard shootings which saw the Park Police, D.C. Metro and D.C. Transit police agencies convening on the scene of an active shooter incident that left 12 dead. The agencies had benefitted from pre-existing relationships and previous disaster exercises.

“Our officers were among the first on scene with Metro police,” MacLean noted. “It didn’t matter what uniform you had on, law enforcement was addressing an active threat. You form a team despite the jurisdiction and personnel and stop that threat.”

Like other law enforcement agencies post 9/11, the Park Police must also look ahead to the next emerging threat, whether a man-made terrorism event or a naturally occurring threat such as a hurricane or viral outbreak. MacLean said his job is to ensure his force is adequately equipped and cognizant of emerging terrorism perils.

“What we are doing in the current environment is asking officers to do a lot more than I did when I entered policing two decades ago,” MacLean said. “That is the most fundamental challenge of intelligence-led policing is forecasting what that next threat is going to be while not losing focus on the other fundamentals of law enforcement.”

Completing the CHDS Executive Leaders Program reinforced and expanded his view of the homeland security enterprise, especially the importance of inter-agency collaboration and viewing issues through the lens of other professions. The program also proved helpful as the National Park Service  is currently evaluating a policy on Unmanned Aviation Vehicles (UAVs), an endeavor that includes multiple partners and stakeholders.

“You cannot be limited in focus to what partners you may think may be critical to your mission in protecting the homeland or the community you serve,” he said. “You have to be innovative, flexible and open to unique ideas and open to cultivating relationships with organizations that may or may not be beneficial (to your mission) in the future.”