The Naval Postgraduate School Center for Homeland Defense and Security (CHDS) Advanced Thinking in Homeland Security program (HSx) is an 18-month collaborative program designed to build our understanding of future security challenges facing the nation and global community. In what’s commonly referred to as a “Grand Challenge,” HSx participants are required to identify and research a complex issue that has potential to affect homeland security. The techniques they apply in addressing their grand challenge provide a foundation that can be used to understand and solve many different types of issues. So it shouldn’t come as a surprise that a group of HSx graduates were awarded grand prize in the HeroX Building Empathy Challenge. 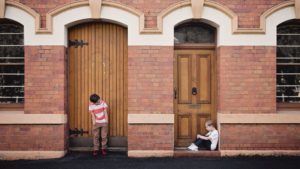 Image from the virtual reality app that HSx participants Merideth Bastiani and Michael Brown provided with their submission in the HeroX Building Empathy Challenge.

Sponsored by KEO Marketing, the purpose of this competition is to design an application that allows users to develop empathy by experiencing another person’s life. The team was comprised of Merideth Bastiani and Michael Brown (both are NPS-CHDS master’s graduates and HSx participants). Bastiani, who is a Manager of the Child Care Subsidy Program with the New York State Office of Children and Family Services, served as the Team Lead for the project. Their grand prize-winning submission is titled “GREENER: The Other Side of the Fence.” GREENER is a two-tier Virtual Reality sandbox style app that rewards and instills empathy through simple, user-generated tools that enable a player to walk in the shoes of someone else. It immerses the player into others’ experiences, showing that the grass may or may not be always greener on the other side of the fence.

Bastiani was encouraged to jump feet-first into Building Empathy Challenge after her team was named finalists in the DHS Hidden Signals Challenge, even though she only had one week to put together a proposal. Bastiani credits her NPS-CHDS education with laying the foundation for being able to understand an issue and solve it quickly without sacrificing perspective. “One of the outcomes of HSx is that it brought us together and created a strong skillset that allows us to work quickly,” she stated. “You can’t develop a proper solution unless you fully understand and acknowledge the surrounding issues.”

But the HSx project success doesn’t stop there. More recently, a team of NPS-CHDS graduates and HSx co-founders had their FindMe System selected as Honorable Mention Award winners in Phase I of the U.S. Coast Guard’s Ready for Rescue Challenge. It was the third time a team of HSx participants received accolades for collaborating on a public open-source challenge in the last year. For the Ready for Rescue Challenge, the team included Merideth Bastiani, Steven M. Polunsky, Angi English, Andre Billeaudeaux, Greg Bernard, Michael Larranaga, and William Pilkington. These graduates are members of the first cohort to complete the HSx program, thus earning the ‘co-founders’ moniker. As Bastiani put it, “We were sort of building the airplane as we were flying.” 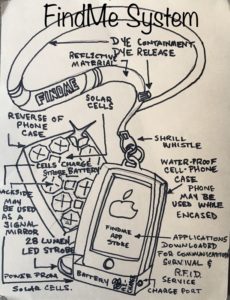 Artistic rendering of the FindMe System created by HSx participant Andre Billeaudeaux for the USCG Ready for rescue Challenge.

The Ready for Rescue Challenge is a competition to create solutions to make it easier to find people in the water. According to the competition’s website, the ideal solutions are effective, affordable, and have potential applications for recreational boaters. “Sometimes the best ideas are the ones that are the most simple and right in front of us,” Billeaudeaux noted. “In the FindMe case, our diverse team focused on re-imagining how previously disparate and previously non-associated maritime elements might be brought together to give scared and desperate individuals a better chance of survival in an often-deadly aquatic environment.” The FindMe System (FMS) is designed for broad appeal to all types of recreational boaters and includes a lightweight waterproof pouch with powered rescue light, signaling mirror, dye-pack lanyard, and survival apps.

Before the FMS team identified their solution, they considered dozens of other ideas and concepts. They arrived at their innovation by employing a process that can be described as a hybrid between ‘rapid prototyping’ and ‘design thinking.’ The group coalesced around the idea of a FindMe System and decided to go for it. By applying the skills the team honed in the HSx program, they were able to quickly identify an ideal human-centric design even though the USCG challenge wasn’t specifically a homeland security issue. “Everyone just took a deep breath, cleared old interpretations and re-imagined what an average person might benefit from if they were tossed into the ocean and left behind,” Billeaudeaux shared. “Role playing, detailed ‘what-if’ and improvisational thinking played a huge role in creating notions of what a new standard life-saving tool should be.”

What’s next for Team FMS? They are invited to participate in Phase II of the Ready for Rescue competition and pitch their solution in a “Piranha Pool” to compete for a total prize pot of $120,000. The Phase II prize money will assist Phase II winners in developing their concept into a working prototype. If selected, they will move on to Phase III where the Coast Guard will field test prototypes alongside standard USCG-approved safety equipment. Billeaudeaux summed it up by stating “The FindMe system was just one example of the ‘gloves off’ HSx process at work and we’re very excited to move from the cerebral to the working dimension in the next round. It’s time to build and test that better mousetrap…this is where the fun begins.” At the conclusion of Phase III, the judging panel will award a total of $110,000 in additional monetary prizes. So, the journey isn’t over quite yet and there’s still much work to do, but Team FMS is up to the challenge—which is reinforced by their catchy team slogan ‘We’re up all night to save lives.’