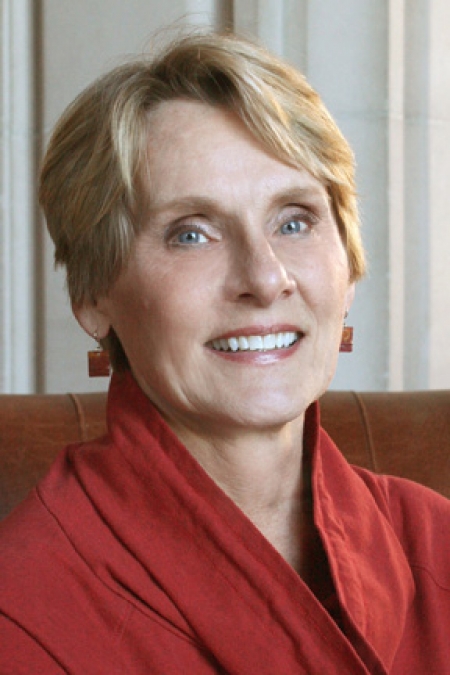 Ellen Gordon of the CHDS faculty was inducted into the International Network of Women in Emergency Management and Homeland Security (inWEM) Hall of Fame during the group’s conference held in San Antonio, Texas, on November 15.

Gender bias put Ellen Gordon on an unexpected career path. She ended up blazing a trail.

Gordon, a Center for Homeland Defense and Security, Naval Postgraduate School graduate and associate director, was inducted into the International Network of Women in Emergency Management and Homeland Security (inWEM) Hall of Fame during the group’s conference held in San Antonio, Texas, on November 15. Gordon is a CHDS Master’s degree graduate from the inaugural cohort and currently serves as CHDS Associate Director of Executive Programs in which she oversees the Executive Leaders Program.

“CHDS is incredibly fortunate to have Ellen Gordon leading our executive leaders programs,” said CHDS Director Glen Woodbury. “She clearly embodies the principle of the ‘academic-practitioner’ and continues to push for excellence in homeland security education. Her insights and critical inquiry serve our students exceptionally well.”

Gordon was the first female director of Iowa Emergency Management and Homeland Security as well as the first female president of the National Emergency Management Association. She is among eight women and organizations to be inducted to inWEM’s Hall of Fame this year. The organization is a network of emergency management professionals working in government, academia, non-profit agencies and the private sector.

“One factor, which led to Ellen Gordon’s induction into the 2014 International Women in Homeland Security and Emergency Management Hall of Fame, is her exemplary academic and leadership achievements; blazing a trail for others to follow in the evolution of emergency management and homeland security,”said Dr. Jacqueline McBride, founder and President of inWEM.

Gordon had originally planned a law enforcement career after graduating with a criminal justice degree from Truman State University. That was an era when police departments were reluctant to hire women.

“I was literally told over and over that ‘We do not have room in our department for a woman,’” she recalled. “Women in law enforcement were a new thing. That has certainly changed, and I applaud young women who still strive to achieve in this field”.

Gordon veered, instead, to the emergency management profession where she made a mark. After a stint as a county emergency manager, she was hired by the administration of Gov. Terry Branstad as an operations manager and public information officer. Just two years later she was promoted to the top job at the agency in an emergency management and homeland security career that spanned almost 30 years and two governors, Republican Branstad and former Gov. Tom Vilsack, a Democrat.

Over the decades Gordon witnessed a string of trends, from hazardous materials response in the 1980s to more frequent and more intense natural disasters. The 2000s ushered in the homeland security element into the profession.

“Each of those decades had a new emphasis, but you did not lose the responsibilities from the previous years,” Gordon said. “You added to them. The growth of the areas of responsibility was tremendous over a nearly 30-year period.”

Although weathering disastrous events were the big challenges, her prized accomplishment remains building a team, she said. The importance of teamwork is an ethos she continues as she oversees CHDS executive education programs as well as in her consulting work.

“The most rewarding aspect was building a team of wonderful people who worked with me year after year, to respond to the needs of Iowans” Gordon recalled. “When I left state government, the most important thing I carried with me was the strong sense of being part of a cohesive team, providing leadership while at the same time learning from the great group of people around me.”

“Being involved on the statewide and national levels is important because you learn from what others are thinking and doing,” she said. “You’re there at the cusp, helping frame policy and a positive future.

“Last, but not least by any means, I was fortunate over the years to have solid support from my son. We grew up together with emergency management as a part of our lives. Many evenings and weekends were missed because I was responding to disasters and emergencies. But, he stuck with me and was my greatest supporter.”