Known for his southern charm and outstanding facilitation skills, Stan McKinney, Director of Executive Education Programs at the Center for Homeland Defense and Security (CHDS), has dedicated his career to making communities safer and better prepared to handle natural disasters and terrorist events. So it’s fitting that McKinney was recognized by the National Emergency Management Association (NEMA) with the 2018 Lacy E. Suiter Distinguished Service in Emergency Management Award—which is given annually to an individual who has contributed greatly to the emergency management profession.

“I believe he was the perfect recipient because he epitomizes everything the Lacy E. Suiter Distinguished Service Award stands for to include a high level of integrity, a strong commitment to everything he does and continuously striving for excellence,” Ellen Gordon, Associate Director of Executive Education Programs, noted. 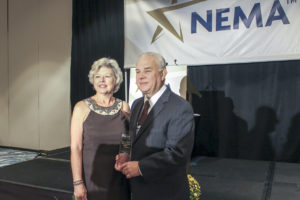 McKinney first gained national recognition as Director of the Emergency Management Division for South Carolina, a position he held from 1993–2002. Little did he know that the experience he gained developing and leading South Carolina’s emergency management system would become instrumental in helping the country transition into the homeland security era. In 2001, McKinney was asked to serve as a key advisor on emergency management operational policy in the wake of the September 11th terrorist attacks by assisting states to develop their initial Homeland Security State Strategic Plans. Some of McKinney’s most memorable projects were borne from the work he did at the state level. “It provided opportunities to address the full spectrum of leadership,” he reflected.

McKinney was also part of the initial planning group for the Department of Justice (DOJ) that created the Naval Postgraduate School Center for Homeland Defense and Security. Upon establishment of CHDS, McKinney was appointed Associate Director of Executive Education Programs (EEP). In this role, he oversaw the development and delivery of hundreds of executive education workshops, seminars, and training for local, state, and federal officials before eventually serving as Director.

“I take great pride in our ability to develop leaders who are prepared to handle any type of crisis,” McKinney remarked. “Modern threats to public safety are more dynamic and unpredictable than they were in the past—due in part to the growth of technology. As we become more dependent upon critical control systems and infrastructure, the need to understand complex relationships becomes more urgent and crucial to successful preparedness.”

While the relationship between McKinney and award namesake, Lacy Suiter, predated their work at the Naval Postgraduate School, it was at CHDS where they really had a chance to work together closely. They even teamed up to deliver the first Mobile Education Team seminar. “I think he (Suiter) would have been very proud of the contributions the Center has made to the emergency management profession. He always had an eye on the future of education, especially in the realm of homeland security. I am honored to receive this prestigious award” McKinney shared. 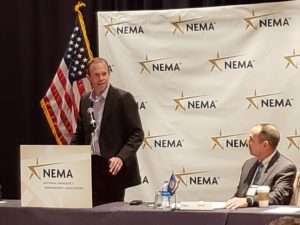 McKinney is also a past President of NEMA (1997–1998) where he advocated the development of national policies to improve strategic and operational effectiveness of emergency management agencies. He holds a Bachelor of Arts degree in Political Science-Public Administration (1980) and a Master of Criminal Justice (1988) from the University of South Carolina.

Emphasizing the importance of McKinney’s contributions to prepare our nation, CHDS Director Glen Woodbury articulated, “Stan’s contributions to the safety and security of our nation is singularly significant. He put his heart and soul into everything he did throughout his distinguished career. The Center congratulates him for this well-deserved award.”

[Note: The prestigious award is named in honor of Lacy E. Suiter, one of the nation’s most experienced and respected emergency management and homeland security leaders and one of the CHDS founders. In 2017, the award was presented to CHDS Director Glen Woodbury. Since the inception of the award in 2006, nearly all of the recipients have a strong connection to CHDS.]