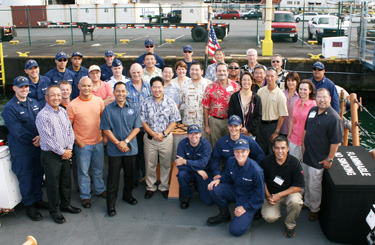 PELP cohort 1402 with the crew of the U.S. Coast Guard Cutter KISKA

Decisions made by homeland security professionals and emergency managers can make the difference in preventing a disastrous events from becoming catastrophic, a longtime response professional told 25 students at the Center for Homeland Defense and Security Pacific Executive Leaders Program (PELP).

The fifth iteration of the PELP was held in Hilo, Hawaii, March 10-14. The course brings together homeland security and emergency management professionals from throughout the Pacific Rim region to discuss and debate emerging topics with the CHDS Pacific ELP Team and renowned subject matter experts. Topics at the weeklong course encompassed cyber-security, emerging threats, disaster response and legal issues.

One of those experts was Bill Carwile, a former FEMA Associate Administrator and Vietnam veteran who has responded to some of the most high-profile events of the past 20 years. 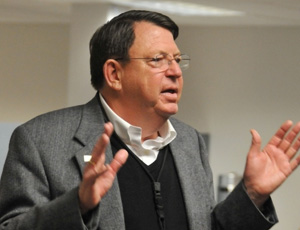 Carwile shared his expertise in the world of response, espousing the importance of forming professional relationships before a crisis and crafting emergency plans that are well-exercised. The discussion further addressed how the news media and elected officials can influence response and how communities should bolster emergency plans by enlisting, and planning for, the “whole community.”

Decisions by elected officials have tangible impacts on survivors and the community’s well-being. As examples, Carwile compared and contrasted management of Hurricane Katrina in Mississippi versus Louisiana and Superstorm Sandy in New Jersey versus New York. The most successful responses were in states with strong, hands-on governors, he said. Areas with less successful disaster response and recovery were those in which leadership at the state level conflicted with that of major cities.

The key is to keep executive decision-makers informed as much as possible about response policies and practices.

“It gets really tough when they get engaged and don’t know what the plans are,” Carwile said. “They do have a responsibility to answer to the public, so you have to be sensitive to their concerns, but you have a duty to inform them.”

Carwile offered an array of tips for preventing events from evolving into, among them:

The course was kicked off with remarks from Tim Manning, Deputy Administrator

“I think many people consider lawyers and the law to be separate from them,” Wheeler said. “With the homeland security enterprise they are not. All of us need to be part of the process. We need an educated group of leaders in the enterprise to be the ones calling the shots.”

The presentations from practitioners on current topics were one of the benefits of attending the PELP, said Roy Tsutsui, Defense Coordinating Officer Representative with the U.S. Navy in Guam.

“It’s a person that has a connection to that information so their credibility gives you a stronger perspective,” Tsutsui said. “It’s coming from an expert who has been there rather than an academic expert. That type of learning hits home for me.”

The course further created a network of alumni as well as forcing students to consider issues from the vantage point of the varied professions in the class.

“It put many things into perspective and challenged every participant to think in and outside the box,” said Michael Shibata, Business Continuity Manager with Central Pacific Bank in Honolulu. “The newly formed contacts I made and the breadth of experience by the presenters and fellow classmates made the whole experience worthwhile.”

Shawn Tsuha, Deputy Director of Law Enforcement, Honolulu Department of Public Safety, said: “The Pacific Executive Leaders Program provided me with an exceptional opportunity to learn and share ideas about the critical risks and possible solutions for Homeland Defense. The logistical support, instructors and subjects along with the collaborative learning environment were outstanding.”

The PELP was established in 2011 with the intent of bringing CHDS educational content addressing common homeland security and emergency management topics to issues unique to Hawaii and the Pacific Islands. The content is updated each session to mirror the ever-changing threat matrix that faces the region.

“The program has evolved in terms of content, both in terms of speakers and types of topics we discuss,” said PELP Program Manager David Fukutomi. “Generally, we’re talking about threats in the Pacific and they change daily. So, we try to give them a picture of what the current situation is. The key is that we have an established a track record of collaboration and have developed the capacity to build on those relationships to solve complex issues in the future.”