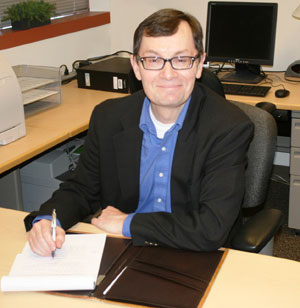 After four years as a faculty member at the Naval Postgraduate School Center for Homeland Defense and Security, recently honored Assistant Professor Erik Dahl is expanding his role at the Center as its Academic Associate.

Dahl is beginning his first full year in the Academic Associate position. And, he was honored in December as winner of the Lieutenant Commander David L. Williams Outstanding Professor Award at the Naval Postgraduate School’s Fall Quarter Awards Ceremony. It is named in honor of Lieutenant Commander Williams, a Naval Postgraduate School alumnus who was killed in the September 11, 2001, attack on the Pentagon.

"That hits home with me," Dahl said. "I served in the Pentagon as a lieutenant commander a decade earlier. I was an intelligence officer in the CNO Intelligence Plot, which was destroyed in 9/11."

Dahl came to Monterey after retirement from the U.S. Navy. He served 21 years as an intelligence officer and later received his Ph.D. from the Fletcher School of Tufts University. In addition to his CHDS responsibilities, he is an assistant professor in the National Security Affairs Department where he has taught Introduction to International Relations, Research and Writing for National Security Affairs, and Intelligence for Homeland Defense and Security. Dahl has coupled his Navy field experience with academic research to analyze aspects of America’s security. At CHDS he team teaches the course Intelligence for Homeland Security: Organizational and Policy Challenges. As Academic Associate he will add an administrative role to his duties.

Each degree program at NPS has an Academic Associate whose role is coordinating the department’s degree curriculum. Among Dahl’s duties will be ensuring CHDS faculty and students have the resources and tools needed to be successful.

"My job is to make sure the program gives students everything they need to receive the best education in homeland security available anywhere," he said.

CHDS differs from other campus degree programs in that it is funded by the Department of Homeland Security rather than the Defense Department and because it blends network and classroom learning.

Part of Dahl’s job is ensuring the CHDS sponsor, DHS/FEMA, that CHDS is providing the quality of education expected while also blending the Center into the broader NPS community.

"This is one of the most challenging parts of the job because many here at NPS don’t understand CHDS and wonder why we are here," he said. "I would like to bring more NPS faculty into the CHDS family as thesis advisors and course instructors, and to help ensure our program meets and exceeds every requirement and standard NPS sets for its master’s programs."

Dahl’s recently authored book, "Intelligence and Surprise Attack," was released by Georgetown University Press in July and analyzes U.S. intelligence failures from Pearl Harbor to the 9/11 attacks and beyond.

As Academic Associate he will have an open-door policy for students and staff.

"I want our students to know I’m available for advice or assistance on their courses, theses or anything else they need," he said. "That’s why I’m here."