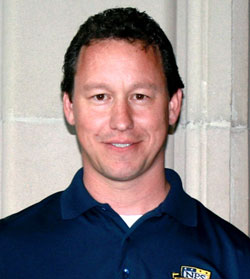 For Texas Department of Public Safety (DPS) Captain Jaeson Jones the concepts of multi-agency partnering often taught at the Naval Postgraduate School Center for Homeland Defense and Security provide the necessary ingredients for a successful information-sharing program – an effort the Department of Homeland Security would like to see replicated.

Jones is a 21 year veteran of Texas Law enforcement and a graduate of the CHDS Fusion Center Leaders and the Executive Leaders programs.

“Prior to CHDS, I came with a mindset of how to bring law enforcement in to a solve problem,” he said. “What CHDS taught me is that the concept of bringing everyone together is the key. That doesn’t mean there are not challenges, but for us it’s a recipe for success.”

DHS Intelligence and Analysis (DHS I&A) honored Texas DPS in 2013 for implementing a system of sharing sensitive law enforcement information with the federal intelligence community, via the DHS I&A Reporting Branch. DHS I&A is looking at these intelligence successes for similar opportunities in multiple locations throughout the country.

“We have such a great relationship with Texas Department of Public Safety and wanted to recognize them for doing such cutting-edge work,” said Bryan Jablonksi, DHS Supervisory Reports Officer, Southwest Region.

Overcoming trust and sensitivity issues have long been major hurdles between state and local intelligence operations and the federal intelligence community. Jones said it is a necessity in combating the transnational criminal organization operating along Texas’ 1,300-mile border with Mexico.

Mexican Transnational Criminal Organizations (TCO) have diversified their operations and have further expanded their reach globally. TCO’s form alliances with street-level gangs on the U.S. side of the border giving them the opportunity for greater havoc reaching into the American heartland.

“There is a huge gap between what local and state law enforcement agencies are dealing with and fusion centers are helping,” Jones said. “So what we tried to do is fill that gap by providing valuable information to DHS I&A, who then makes sure it gets to the federal intelligence community to help protect the great state of Texas and the nation.”

Information shared by Texas DPS has been briefed at the highest levels of the United States Government. This information is instrumental in providing input to the national Federal leadership including briefings to President Barak Obama and at the top levels of DHS.

“The information that was shared by the Texas Department of Public Safety has been noted and recognized by the United States Intelligence Community and used to inform both policy making and operations,” said DHS Reporting Branch Chief Wesley Moy, who is also a current FCLP participant.