Dr. Nadav Morag of the NPS Center for Homeland Defense and Security instructional staff has authored a second edition of his 2011 book on comparative homeland security policy to reflect a changed threat environment.

Among the modifications is a section on the ever-growing concern over cyber-security as well as the evolution of terrorist groups such as the Islamic State that did not exist when the first edition was written.

European governments have been forced to improve their policy tools as foreign fighters return from places like Syria. Governments have sought to deny re-entry to those fighters, a prime example of the necessity for updated approaches.

“What I’ve found is that policy-making is reactive and lawmaking is reactive,” Morag said. “Nobody anticipated ISIS or what kind of draw it would be. They should have, the same thing happened in Afghanistan after the Soviets left. Those people went home and caused destabilization. Every generation has to relearn things, nobody was prepared in Europe for this kind of phenomenon.”

The primary research for the book required two years of mining public documents and even perusing the NPS-CHDS Homeland Security Digital Library.

“There are piles and piles of documents you go through to understand what in the law has changed, what is allows or doesn’t allow and what authorities it provides,” he said. “ 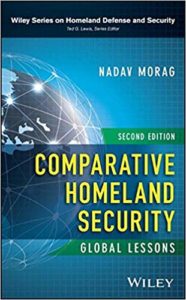 Morag wrote the first edition after discovering scant research on comparative government to aid domestic policy-makers in gauging what is effective and what isn’t. He focuses on democracies such as Great Britain, Israel, France, Germany, Canada, Australia, the Netherlands, and Italy and others by taking on commonly accepted homeland security issues from immigration and border security to public communication and disaster response.

“The 2011 edition was just not relevant anymore,” he said. “The framework is still valid but the facts needed updating. I didn’t want to keep on assigning material that was out of date.”

Morag joined NPS-CHDS in 2005. He is also an Associate Professor and Chair of the Department of Security Studies at Sam Houston State University. He earned his bachelor’s and master’s degrees from UCLA and is doctoral degree from the University of Tel Aviv.