Participants in the NPS Center for Homeland Defense and Security HSx program spent July 11 in a hackathon devoted to crafting ideas to reduce harm from gun violence in K-12 schools.

With whiteboards, sharpies, and laptops ablaze with activity the setting on the second floor of the Dudley Knox Library conference was reminiscent of a Silicon Valley startup. The group spent the day incorporating concepts they have discussed thus far in the program — design thinking, rapid prototyping, entrepreneurship and more. 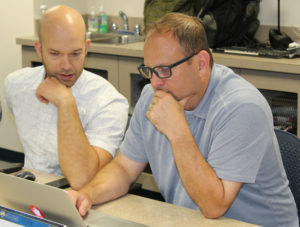 David Riedman and Michael Larranaga share information during an exercise for the HSx program.

The hackathon approach differs from traditional policy writing in which data is collected, parameters set, and product delivered in a typically months-long slog. Instead, the idea was to show leaders how to develop policy while simultaneously obtaining necessary information with an eye toward what the final product may look like.

Similar to academia, group discussion on wording the title of the project soaked up an hour. And that’s just fine. In the quest for sound policy, even rapidly conceived, few aspects were too small to contemplate.

Sub-groups formed to break down the research into three areas – risk assessment, physical measures such as architecture, and socio-environmental factors that lead to active shooters and their occasionally acquiescent peers — and aggregating a single base of disparate information.

“What we’re doing is identifying the underlying facts and trying to develop policy in tandem with solutions,” said participant Desmond O’Neill. “To understand a problem, you have to understand the problem space, which means compiling all the data into a single source.”

Next door, Angi English pondered how lessons from nature and biomimicry could inform secure school design. That involved considering how animals protect their habitats and operate securely in their broader eco-system.

Animals like the humble meerkat provide an example, English said, with their habits of designating sentries to warn of adversaries while hunting.  Animals control entrances to their habitats with multiple egresses and no dead ends, often make those entrances difficult for predators to penetrate and include redundancy in their plans by having multiple routes of escape. 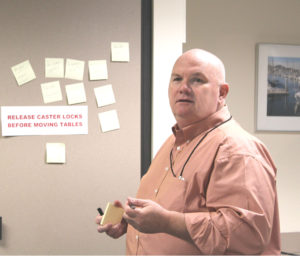 “Although humans have advanced cognitive abilities, we are at our core a species with our own ecosystems, interactions and security needs as in the natural world,” English said. “Risk, variation and uncertainty are elements of both natural and human ecosystems. The efforts here are to find way to thrive in an uncertain world given the risk of school shootings.”

“We’re providing tangible mitigation strategies by enhancing physical security requirements while making the space aesthetically pleasing without it being overly austere,” O’Connor said. “When you don’t realize you’re being protected you don’t worry that you are being protected.”

Public safety needs to be at the table when public buildings are designed, Delaney said. Knowledge of architecture and real-time video feeds can help commanders position assets during an emergency.

“Police and fire need to have an influence on how these buildings are designed to make our response smarter,” Delaney said.

Nick Catrantzos, John Comiskey and Michael Larranaga examined social factors that contribute to not only a mass shooter mentality, but also what inhibits their peers from reporting them when they make serious threats. They looked at factors such as attendance, academic history and behavior as factors to identify potentially threatening students and ways to intervene before they act out.

“The vast majority of targeted school shooters told someone in their social circle and/or showed their weapon of choice, their gun to fellow students prior to the attack,” Comiskey noted. “Tragically, most of the people with critical information told no one until it was too late. Breaking the adolescent code of silence is a critical link.”

Meredith Austin, Merideth Bastiani, Michael Brown, Andre Billeaudeaux and Leslie Holland were also working on behavioral health. As Austin said, they wanted to explore preventing these type of attacks “left of a bang.” The team collaborated on a scoring system to assess the inclination of youth to commit violence. 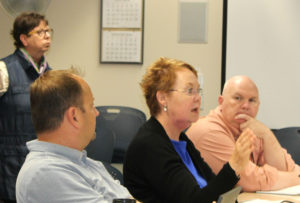 “Shootings are just one of the many outcomes we see,” Holland noted. “Our (scoring system) isn’t about guns per se, but what is behind the guns.”

The hackathon was emblematic of the non-degree HSx program, which was envisioned as a course in advance thinking on homeland security drawing from NPS-CHDS alumni. The cohort has worked together to identify emerging homeland security issues and explored novel ways at arriving at solutions. Expert speakers from companies such as Google have presented and the participants have published a plethora of multi-media studies on the NPS-CHDS Education website.

“We’ve spent the past year giving you the tools to do this,” said course facilitator Tim Manning, former Deputy Administrator at FEMA. “The whole idea here is experimental education and coming up with new approaches and solutions from the get-go.”