Public health professionals in a two-county area of North Carolina can use real-time data to detect early, even predict, an infections outbreak – all thanks to a team project from participants in the NPS Center for Homeland Defense and Security HSx program.

A quartet of HSx participants led by William Pilkington, Public Health Officer with the Public Health Authority of Cabarrus County, North Carolina, developed the project, which was one of five finalists in this year’s DHS Hidden Signals Challenge. The HSx team called their project the One Health Alert System. 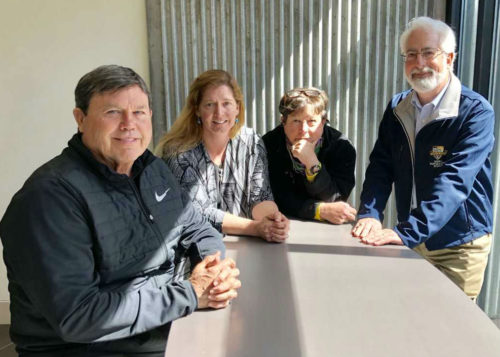 “They said to pick something you know that works and make it better,” Pilkington said. “To be named as one of the five finalists was attributable to coaching from Chris and Rodrigo.”

The Hidden Signals Challenge was a national contest sponsored by DHS Science and Technology that was intended to develop early bio-threat detection using data analytics and incorporating multi-discipline approaches. Pilkington was joined by classmates Meredith Bastiani, Angi English and Steven Polunsky to complete the One Health Alert Team.

The team devised a system that incorporates existing daily disease reports in which healthcare providers in Cabarrus and Rowan counties, northeast of Charlotte, enter data about conditions and symptoms they are treating. Each day some 43 providers enter the data and a top 10 list of complaints for the day is generated. The NPS-CHDS team developed a model that analyzes those reports to detect an outbreak in near real-time and well before Centers for Disease Control alerts are issued.

“It’s in place here and it’s working very well,” Pilkington said. “Not only do we know (of an outbreak) within ten minutes, we can plan the next day’s work for all of our medical providers.  For homeland security purposes, if something happened in our two-county area, we’d know it before any existing system.”

So, for example, when a patient exhibiting Ebola symptoms like a high fever with recent travel to West Africa walks into an emergency department, the public health officials could react in a matter of minutes to keep them at the hospital and isolated. That is important because during the 2014 Ebola scare in Dallas a patient was unwittingly released after being treated in a hospital emergency department.

During a second phase of the Hidden Signals Challenge, the five finalists were tasked with refining their entries. The NPS-CHDS team worked with an artificial intelligence company that helped plot patterns to predict the next infectious outbreak.

The goals of the HSx program and the DHS contest coincided in this instance. Both wanted to solve real-world problems by employing novel thinking. The project team also benefited from their diverse backgrounds.

“That is one of the values of HSx, we bounced ideas off the entire group,” Pilkington said. “We have a cohort of people where everybody has their own unique skill set. The team had brilliant writers, AI expertise and people who have creative analytical skills. All of that was helpful because even if they didn’t have experience with health care the skills we needed were the skills they had.”

Bastiani, Manager of the Child Care Subsidy Program with the New York State Office of Children and Family Services, said a session on innovation during the first week of the course aided her approach to the contest.

“I think this session helped all of us, as the team set about the project primed to defer judgment, encourage wild ideas, and build on the ideas of others,” Bastiani noted. “This approach made it comfortable to take risks and motivated me to really dig into the subject matter, much of which was entirely new to me.”

Polunsky said the team approach with like-minded participants showed him the immense value of HSx.

“We needed a leader with deep subject knowledge in combination with motivated people who see connections and can fill in the blanks in a cohesive, targeted way” Polunsky noted. “It turns out the room is full of people like that.  Much of the research, especially the potential use and impacts of social media, is applicable in other areas, including my specialty of transportation.”

Discussions on the concept of design thinking proved insightful for English. Design thinking is a five-stage problem-solving process based on human-centric solutions and emphasizing the importance of empathy, brain-storming, testing, and prototyping.

“The process helps simplify and humanize complex processes that often keep organizations stuck because built into the framework is the tolerance for testing and reiteration of prototypes, eventually leading to solid ideas or problem-solving environments,” English noted.

As a finalist, the team earned a cash prize of $20,000. The contest winner emerged from Boston Children’s Hospital for a project dubbed Pandemic Pulse that uses social media and web search data coupled with monitoring tools to detect a bio-threat signal detectors.

Pilkington presented research on the project at the 2018 National Homeland Security Conference and intends to continue refining and improving the system.

“This addresses a problem nobody had solved yet,” Pilkington said. “We have a system that is actually working that we developed that through the HSx program.”