“I am pleased to congratulate Peter Gaynor, of Rhode Island, on his nomination to be Deputy Administrator at the Federal Emergency Management Agency,” FEMA Administrator and ELP alum Brock Long said in a written statement. “Peter has a wealth of experience in emergency management, organizational change, planning, and policy. We look forward to working with the Senate on a speedy confirmation.” 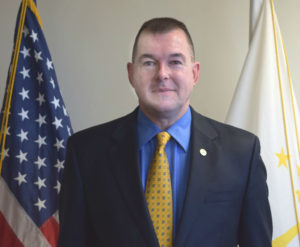 ELP alumnus Peter Gaynor was nominated to be Deputy Administrator at FEMA. (Photo courtesy of RIEMA)

Gaynor began his emergency management career with the city of Providence, Rhode Island, in 2008 after a two-decade career in the Marines. He was named the Director of the Rhode Island Emergency Management Agency in 2015.

The ELP program was an invaluable part of his professional development. The nine-month program meets for four in-residence sessions to give senior leaders insight into the homeland security enterprise.

“I had a great experience in the ELP,” Gaynor said. “Most days in this job you’re under water and don’t have time to come up for air and consume new perspectives. The ELP takes you out of your element and puts you in the same room with really smart students and exposes you to thought leaders.”

Gaynor was fresh out of the military and plotting his next career stage when a historic snowstorm blanketed New England. Infamously known in Rhode Island as the “December Debacle,” it caught many local and state agencies off guard and led to led to widespread leadership changes. One of the jobs that opened up was the Director of Emergency Management and Homeland Security in Providence.

“I was an infantry officer,” Gaynor recalled. “I thought how am I going to convert the skills I learned in infantry to civilian world? There’s not a great checklist for that.”

In fact, military experiences translated well to his second career, he found. While in the military, he had served as the executive officer responsible for the security of Camp David, and as the head of Plans, Policy, & Operations at Marine Corps Headquarters during the attacks of September 11, 2001. Moreover, leadership skills and organizations are essential characteristics in leading an organization and the military and emergency management profession share a common credo: exercise, exercise, exercise.

“In the Marine Corps you have to embrace chaos,” said Gaynor, who earned a Master of Arts from the U.S. Naval War College. If you can’t overcome chaos, you’re going to have a hard time. And in emergency management, chaos is all around you.”

That background was helpful as Gaynor made some tough decisions about the agencies he led. In Providence, he hired an all-new staff and guided the construction of a new building for the department.

“That job in Providence exceeded all my expectations about working for local government,” Gaynor said. “The seven years that I spent there was professionally the most fulfilling part of my career.”

During his tenure at the state level, Gaynor pushed to update job descriptions at the Rhode Island Emergency Management Agency that had been in place since the Cold War era, a task that required working with the affected employee unions as well as with the Division of Human Resources.

His goal at FEMA would be assisting in implementing Long’s stated goals of reducing the complexity of FEMA programs, fostering a culture of preparedness and sharing the challenges of emergency response with state and local governments

Also, he plans to use a valuable lesson he has learned working at the local and state level.

“It’s the people that make a difference,” Gaynor said. “A lot of times we get tunnel vision on solving problems with a piece of technology and you overlook the people. When we make sure to put emphasis into providing people the training, education, and freedom to work on new ideas, that is good for morale and good for the agency.”