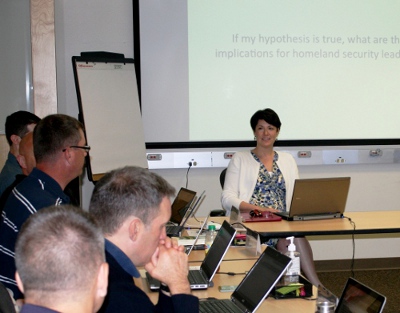 Lynda Peters looks forward to continuing her education at the Naval Postgraduate School Center for Homeland Defense and Security.

This time around, though, the Chicago City Prosecutor is attending as the newest faculty member at CHDS after having graduated in 2012. Peters joined the faculty earlier this year and has been teaching the Introduction to Homeland Security class.

"From a personal standpoint, it allows me to continue my homeland security education, further hone my writing skills and keep current on issues," Peters said during a recent interview. "The Center and the folks affiliated with it are such an amazing group of people, and the students are of such a high caliber, the opportunity to continue a relationship with them was too good to pass up."

A graduate of DePaul University College of Law, Peters brings a fresh perspective as an attorney on the CHDS faculty with a municipal background. She began her career as a prosecutor in Cook County, Ill., before joining the city of Chicago in 2003. Her career path has entailed a variety of trial assignments as well as policy, legislative and planning projects, including training exercises for a potential pandemic influenza outbreak in her jurisdiction.

Peters’ legal background and career bring a different perspective to the CHDS classroom from first responders and the other professions commonly associated with the homeland security field. She points to an example of closed circuit television used by urban areas around the country to detect and prevent terrorist acts as well as monitoring potential criminal activity.

"There are a number of legal requirements for keeping footage that most homeland security practitioners are not aware of, but they need to be factored into any decision to begin a government-operated camera network," she said. "Bringing a legal perspective about issues such as that into the CHDS classroom demonstrates the role attorneys can play in the homeland security field."

Peters brings years of experience to the job, having taught courses for law enforcement on conforming to statutory and constitutional requirements when arresting and interrogating offenders as well as teaching young attorneys litigation skills. The difference between those courses and teaching at the Center is that the former relies on primarily on lecture and mock trials while CHDS study is more interactive among professors and students.

"The Center’s approach to learning is as much student-to-student as instructor-to-student," she noted. "The Center’s environment allows you to provide some information about various homeland security topics as an instructor, but it’s not constrained to a lecture format."

"With the law you are constrained by precedent and have to make a convincing argument as to why a situation should be treated differently. Changes in how case law treats an issue can take years and, consequently, the courts are slow to address topics such as the rapidly changing technology environment," she said. "The CHDS program in homeland security is tied to the future. You need to be thinking not only what threats, risks and vulnerabilities exist today, but also spot trends and policy issues for the future. There is an expectation you are going to be challenging how the country presently is or is not handling homeland security issues, and that frees you to come up with innovative direction for your jurisdiction rather than being tied to the past."

Upon graduating CHDS, Peters was awarded the Center’s Curtis H. "Butch" Straub Award, which is based on grades, thesis and classroom leadership. The honor is in memory of one of CHDS’ founders. Her thesis was titled "Utilizing Social Media to Further the Nationwide Suspicious Activity Reporting Initiative" (PDF).