Master’s Degrees Awarded to 31 at CHDS 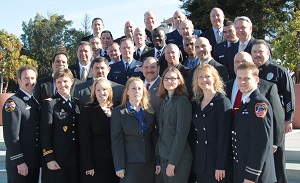 "These graduates bring great credit to themselves and their professions. They will join the expanding network of homeland security leaders who are shaping the future of our nation," said CHDS Director Glen Woodbury.

Three students earned awards for their work in the Center for Homeland Defense and Security master’s degree program:

The newest CHDS alumni include: