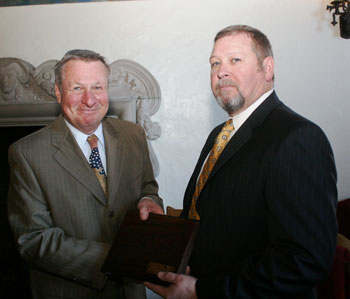 As a faculty member at the Center for Homeland Defense and Security, David Brannan brings years of law enforcement street credentials along with a stellar academic background into the classroom where he analyzes the intersect between theology and terrorism.

That blend of experience, study and teaching style earned him the Lieutenant Commander David L. Williams Outstanding Professor Award on March 20 for his exceptional teaching performance. The award is in honor of Lieutenant Commander Williams, a Naval Postgraduate School alumnus who was killed in the September 11, 2001 attack on the Pentagon.

The award was presented during a ceremony in Herrmann Hall on the NPS campus as about a dozen students and faculty were honored as part of the 2012 Winter Quarter Awards ceremony.

Brannan was quick to deflect credit, and said the teaching environment nurtured at the Center was established by its directors, such as Ted Lewis, Glen Woodbury and Chris Bellavita, should share the honor.

"We have a unique learning environment here," Brannan said. "I have an off-the-wall approach. They are supportive of that."

He joined the CHDS faculty in 2003 after an impressive track record including 12 years in domestic law enforcement, six years on a SWAT team, advisor to the Mongolian National Police and – taking a hiatus from teaching at CHDS — a stint in Iraq. As a director of security policy for the Coalition Provisional, Authority/Ministry of Interior he was wounded by mortar fire. His practitioner expertise is complemented with a master’s and a doctoral degree from St. Andrews University in Scotland, where his dissertation was titled "Violence, Terrorism and the Role of Theology."

His faculty role at CHDS enables him to continue that academic concentration and one of the appealing aspects of teaching at the Center, he said, is that he builds on that knowledge from the insights of the mid-career professional students in his classroom. The student body is well represented by the first responder community that is witnessing the manifestations of theologically driven angst.

"They have been gracious to realize I’ve been in the same place they’ve been," he said. "It’s beneficial to me. I would go crazy if I had to teach undergraduates. These students are professionals and they feed in to my research."

Brannan gained interest in the topic from a mentor, Bruce Hoffman, former vice president and director of the Washington DC office of the RAND Corp., as well as Pat Miller, a CHDS alumni and faculty member, retired Chief of Police and 30-year mentor and friend to Brannan. Hoffman conducted early research into the link between theology and terrorism in the early 1980s and is a current Georgetown University Professor.

"I was just looking for what the next thing was," Brannan recalled. "We decided the next big thing was going to be theologically motivated terrorism."

Years later that choice of academic study would prove prescient as Brannan focused on what, at the time, seemed to most Americans a distant, hollow threat. He moved to Scotland to study in 1996, the same year Osama bin Laden issued his first fatwa against the United States. Bombings of U.S. embassies in Tanzania and Kenya would soon follow as would an attack on the USS Cole in 2000.

After completing his degrees in Scotland, Brannan returned to the United States and continued to analyze theologically driven extremism and U.S. policy in the Middle East as an analyst with the RAND Corp.

On the morning of Sept. 11, he was in his office that overlooked the Pentagon and viewed the destruction below. One of the deceased that morning was Williams, for whom the award is named.

"I saw the plane from our tower," he recalled. "I thought, exactly what we have been talking about has occurred. It was shocking because of the enormity, but we weren’t shocked by who did it."