For NPS Center for Homeland Defense and Security instructor Rodrigo Nieto-Gómez, the one indispensable tool in the homeland security enterprise’s box is simply imagination.

Nieto-Gómez received the Lt. Cmdr. David Williams Outstanding Faculty Award for the 2018 spring quarter. He began teaching at NPS-CHDS in 2007 and is known for incorporating futurist themes into discussions on everything from border security to emerging technologies. Addressing emerging challenges requires the same mindset as traditional threats, he said – imagination. 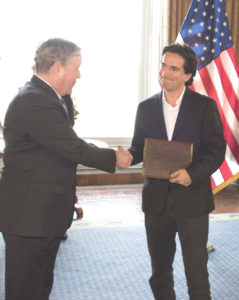 Sustaining imagination will be needed to nimbly address the challenges and benefits of a high-tech future that features artificial intelligence, unmanned aerial systems, and automated vehicles, to name a few. Homeland security professionals are being challenged to achieve policy balance.

“If the homeland security enterprise is not capable of following that trend and look at emerging technologies and react to them we are in trouble,” Nieto-Gómez said. “But we are also in trouble if we freak out if we overreact, overregulate and kill the innovation capacity of the United States.”

There are a string of examples in which enforcement and technology are already colliding. Chief among the concerns is exploitation of platforms in which developers can expound and innovate new technologies for good and for ill.

“One thing we’ve been doing in the classroom and online is thinking more about platforms and the concept of platforming,” Nieto-Gómez said. “When you are thinking about artificial intelligence or virtual reality or drones or quantum computing — they are technologies for other technologies to do technology with them. As such, the creators of the platforms don’t necessarily know what people are doing with the platform.”

Already, exploitation of technology is changing the complexion of the drug war. While law enforcement is capitalizing on drones, sensors and an array of advanced gadgetry to fight crime, the opposing criminals embrace the technology with equal fervor. An example may be seen in drug enforcement in U.S. southern border region where transnational groups are using unmanned aerial systems to transport narcotics and to keep tabs on the cops. Sometimes the criminals utilize the technology faster than regulators and police can keep up.

Whereas companies such as Amazon or Dominos would have to negotiate with regulators to use this drone technology a criminal enterprise does not, he noted. That’s one of the reasons why criminals employ technology faster than legitimate actors, because they don’t have the hurdles of regulations.

“Nobody knows how many drones are operating at the border. The estimate goes from a few to hundreds to the thousands,” Nieto-Gómez.  “If you think about it that makes perfect sense. If you’re a criminal actor why wouldn’t you take some of this off the shelf technology and guess what, because you’re a criminal you don’t have to follow FAA regulations.”

Criminal innovation has also entered into biotechnology as dealers have developed a strain of coca leaf, used to manufacture cocaine that is resistant to the most commonly used pesticide to eradicate it.

“They took the same gene Monsanto uses on GMOs and added to coca plant,” he noted. “That means we now have no eradication tool against that particular strain of cocaine. It changes the geopolitics of the drug trade and it changes the kind of military operations we have available.

Automated vehicles are also prompting policy and regulatory questions. They are promising for improving mobility, especially in urban areas, but they also disrupt the traditional investigative process.

“Does a police department of the future really want to be depending on the company that built the car in order to get data that is one of the most important pieces of information on an accident?” he said. “Or do we want to build that capacity, which would mean an organization like the California Highway Patrol would need to start hiring cyber-technology analyst and provide training for that.”

While the rapid change can be dizzying for policy makers, Nieto-Gómez said keeping up with the unknown of change is an essential part of the homeland security business. That makes it valuable to instill into students the comfort of working with unknowns of a catastrophe that transcends disciplines and departments and jurisdictional bounds.

“Homeland security will always be a discipline of surprises,” Nieto-Gómez said. “While I understand and appreciate the value of bureaucratic management, ultimately homeland security matters for its capacity to improvise. Like many other disciplines, we don’t get the luxury of failing to imagine potential futures. That’s why imagination and future thinking was a core tenant from the beginning of this enterprise. It’s important for us to keep that alive in the classroom and make sure our students, who are the best of the best at what they do, become not only great at following standard operating procedures, but great at writing SOPs and performing when SOPs are non-existent.”