NPS Center for Homeland Defense and Security master’s degree graduate Gloria Chavez was named Chief of the U.S. Border Patrol in the El Centro Sector in April, the latest stop for the more than 23-year veteran of the agency.

As the Chief Patrol Agent of the El Centro Sector, Chavez is indeed someone that has grabbed the attention of the nation, especially in recent times. Despite overseeing some of the most rugged, diverse terrain within the Sector’s 71 linear miles and in temperatures that reach 120 degrees, she doesn’t mind the heat. 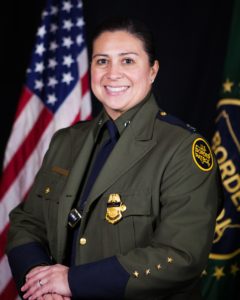 Chavez had to hit the ground running when she took over in April, about a week before Department of Homeland Security Secretary Kirstjen Nielsen and a delegation toured the area. Soon thereafter, Vice President Michael Pence appeared in the valley for a planned visit. All the while a well-publicized migrant caravan was winding its way up the spine of Mexico, resulting in the administration calling up National Guard troops to the border.

Vice President Pence was briefed by Border Patrol leaders, met with the agents working the frontlines, and toured an area of the Calexico border where a new installment of replacement wall is under construction. He personally congratulated Chavez on her new position.

“I think the visit of such dignitaries reflects well on the U.S. Border Patrol and Customs Border Protection, our mother agency,” Chavez said from her office in Imperial, California.  “It was nice to hear words of support to our Border Patrol agents from our Capitol in Washington, D.C. It was such an honor. Never did I imagine having an opportunity to brief a Vice President of the United States during my career.”

The border wall construction began in February 2018 and will extend 2.25 miles at a height of 30 feet. While a valuable tool for agents who sometimes face violence from illegal border crossers that enter in the area, the wall is not a panacea for immigration issues, Chavez noted.

“The wall is already yielding results as we are seeing the flow of illegal border crossers shift to other areas where we can be more effective with interdictions,” Chavez stated. “I’m looking forward to additional technology and manpower to complement this type of infrastructure. I believe that it’s a combination of all these things that delivers true operational effectiveness and situational awareness for us. The border wall is only one piece of larger border enforcement package that includes infrastructure, technology, and personnel. One single thing cannot do it alone.”

Enforcing border security isn’t for just anyone. The 19,000 Border Patrol Agents nationwide with the majority of them on the southern border face treacherous terrain as well as physical threats and occasional assaults that range in severity. The southern border is organized into nine sectors, one of which is under Chavez’s command. The El Centro Sector includes the Calexico, El Centro, and Indio Stations, which are all located in California and are accountable for operating two checkpoints. 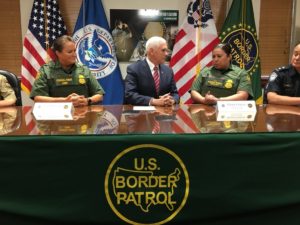 Overall, there are approximately 900 agents and support staff that are responsible for the everyday operations that happen in the 23,000 square miles that make up the El Centro sector.

“Border Patrol Agents are certainly a unique specimen,” Chavez said.  “Regardless of gender, you’re trained to be a Border Patrol Agent and take pride in the work you do. They instill the values of vigilance, integrity, and service from the moment you go to the academy. Our U.S. Border Patrol motto is ‘Honor First’ and each day we work very hard to abide by it.”

When not meeting with high-level officials, Chavez begins her day with a briefing on overnight incidents that occurred within the sector’s jurisdiction. This is typically followed by a Command Staff meeting on mission support items such as budgeting, maintenance, and job vacancies or one covering operational aspects.

Chavez’s time with the Border Patrol has included stints in San Diego, a couple of tenures in Washington, and a Chief Patrol Agent position in the Spokane Sector near the U.S. northern border with Canada

“I found it to be very rewarding to learn and understand the operational and the administrative challenges that exist on the northern border as it strengthened my ability to adapt as needed to ensure that we were achieving operational effectiveness despite the limited personnel, technology, and infrastructure,” Chavez said.

Other differences she encountered involved the nationality of the travelers on the northern border versus the southern one. Those that came illegally into the United States from the north were typically Russian, Indian, Asian, Somali and Canadians compared with the south where it is typically people from Mexico, Central America, South America and the Middle East. Chavez notes, however, that her sector has also apprehended Indian nationals and El Centro Sector leads the nation with this type of apprehensions.

“I felt at the time that the U.S. Border Patrol was going through a transformational change,” she said.  “I wanted to identify a topic of interest that would help us and through a synthesis process see where our agency was and where we needed to go. My goal was to make our intelligence program an agile one like other agencies.”

Even now, Chief Chavez employs a lesson learned from a presentation given by the late Rafe Sagarin, a frequent guest speaker at NPS-CHDS who applied his field of evolutionary biology and how organisms sustain themselves to the homeland security enterprise.

“It was all about survival and learning from the Octopus,” she recalled. “You can learn a lot from nature on how to adapt to security challenges. You have to be adaptable and flexible, and you have to be amenable to change as your environment changes to survive. I use that today. You have to find ways to work with partners to find solutions. If you’re stuck in yesterday or allow constraints to limit your ability to succeed, then you have failed already. You’ll never know success without trying. Be the octopus in your agency.”