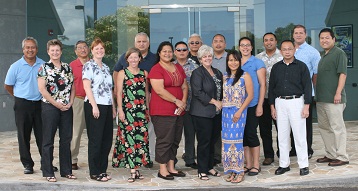 The FEMA-funded pilot program, part of an aspiration of U.S. Sen. Daniel Inouye of Hawaii to build homeland security and emergency management capabilities in the Pacific, drew representatives from federal, state, territorial and local governments as well as non-governmental organizations that are a crucial part of the homeland security enterprise in the islands. The Pacific ELP was designed to deliver CHDS’ Executive Leaders Program for professionals in the Pacific region.

“I’d like to think this is another step in our efforts to broaden the base and reach of our programs and to develop current and future leaders,” said CHDS Pacific ELP coordinator David Fukutomi. “We learned a lot of lessons. Although I have spent a lot of time in the Pacific during my professional career, I was able to gain a lot of new insight this week.”

While the Pacific region faces a set of unique security and natural challenges – including remote and non-contiguous areas, persistent natural disaster threats, and an extended emergency resource system -it also has distinctive assets such as a hearty collaborative ethic and a sense of self-sufficiency among its peoples when disasters occur.

The weeklong seminar covered concepts similar to those discussed in the CHDS Master’s Degree and ELP curricula, such as pandemic disease, systematic planning, terrorism threats, catastrophes, and strategic communications, among others.

A highlight of the week was a question-and-answer session with former Hawaii Gov. George Ariyoshi and CHDS Director Glen Woodbury. In providing a chief executive’s perspective on homeland security, Gov. Ariyoshi encouraged the participants to continue to focus on collaboration and use the challenge of the isolation in the Pacific as an advantage.

Charles Ada, administrator of the Guam Homeland Security, Office of Civil Defense, said networking with others in the field and sessions on planning were most useful.

“The greatest takeaway for me personally, outside the opportunity to network and strengthen partnerships, was the various framing and planning methodologies presented and the faculty’s capacity to stimulate discussions towards identifying solutions to national homeland security, emergency management issues and concerns but yet also unique to our respective region and individual jurisdictions,” Ada said.

David Peredo, emergency services director for the American Red Cross in Guam, said the discussion on pandemic disease was valuable to his organization.

“I was very pleased with the various topics covered and shared with the participants,” Peredo said. “The presenters were well versed with their presentation in the areas of critical information in homeland security that I can take away back with me to our organization which can be a part in disaster preparedness, response and recovery.”

In true CHDS tradition, the participants are the subject matter experts along with the faculty. Fukutomi said emergency agencies on the mainland could learn much from their island counterparts. He pointed to the integrated role of non-profit and social service agencies in the islands’ emergency management and homeland security enterprises.

“We can learn a lot from the islanders on collaboration,” Fukutomi said. “On the mainland, we make a big deal about collaboration. In the Pacific it is a way of life. I wish we could bottle that up and take it back with us.

“Their success here is based on culture and the spirit of family. Because there are fewer resources they tend to think more holistically, culturally. They aren’t as dependent on something coming from somewhere else, because it might not. I think it’s a translation of their traditional practices and culture along with the reality of distance and isolation that forces them to work more collaboratively. It comes so natural that they don’t even think about it that way.”

In delivering the course, CHDS leveraged its seven-year partnership with the Pacific Basic Development Council (PBDC) to provide content relevant to the region. The Center has been working with the PBDC for seven years on homeland security and emergency management issues in the Pacific, which provided a strong foundation for the program. The University of Hawaii at Hilo, the Imiloa Astronomy Center and the community of Hilo also played key roles in supporting the session. Kenith Simmons, vice chancellor for academic affairs, was the guest speaker at the graduation ceremony.

“We will continue to interact with them,” he added. “They can network with each other and can access additional information. They will provide us with another continued and important link to the Pacific homeland security community.”