When baseball fans in Seattle see new benches and art installations on the sidewalks outside the ball park next summer, homeland security may be the farthest thing from their minds.

But what the fans see as major league amenities, NPS Center for Homeland Defense and Security alumna Patti Quirk sees as much-needed impediments to the next potential vehicle attack, the current tool of favor for aspiring terrorists. 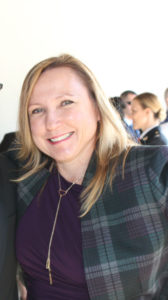 The December 2017 graduate works with the Seattle Department of Transportation managing public spaces, which entails permits for private uses of the right of way such as farmers markets, sky bridges, and business uses such as sidewalk cafés. Her NPS-CHDS thesis, “Fortress America: The Aesthetics of Homeland Security in the Public Realm,” explored how security requirements can enhance the design of public spaces and serve as an amenity as well as providing security. That includes meeting with businesses like the Seattle Mariners to facilitate and improve how those public spaces are best used.

“Studying at CHDS gave me a seat at the table and some credibility with what we were talking about,” she said. “The Mariners want to be the poster child for how urban stadiums meet this homeland security concern.”

The Mariners plan to start installing parameter security improvements before the 2019 baseball season. The security architecture is part of the team’s mission to provide a clean, safe and friendly entertainment experience, said Ryan Van Maarth, Senior Director of Construction and Planning for the team.

“Investing in aesthetical perimeter security architecture is critical for us to execute our mission in the future,” Van Maarth added. “SDOT has been fully supportive of our intention to improve the safety at our ballpark.  We appreciate that their staff is educated on homeland security methods and infrastructure improvements because it makes this partnership stronger knowing that we have aligned goals through the project.  Their collaboration has been instrumental in improving our fan experience.”

When the team applied for a city permit to install the structures a couple of years ago Quirk began asking questions, especially exactly what the end goal was. As she studied and conducted research at CHDS Quirk provided documents and designs from the United Kingdom to the team. Since that time the Mariners have restarted the process, and Quirk has developed some academic expertise on the subject

“I think my CHDS gave me that credibility and provided my agency with some in-house expertise,” she said.

Quirk’s studies at NPS-CHDS came as terrorists began sifting methods. Rather than bombs or guns, the Islamic State encouraged far-flung followers to use automobiles as weapons in their brand of terror. That’s where Quirk’s thesis idea came to be. As she analyzed the standard guidance for barriers she found their aesthetics depreciated the public’s enjoyment of the space. Public spaces are intended to be welcoming and inviting, encouraging people to linger, to dine at a sidewalk café, or visit an open-air market. If the space seems overtly secured the public tends to pass quickly through the space or avoid it all together. The United Kingdom has been a step ahead, owing to its experiences with terrorist bombs in Northern Ireland and London since the 1970s.

“The U.K. has done a lot of work,” she said. “In the U.S., we are still in reaction mode. They’ve moved beyond reaction mode and are saying they don’t want their cities to look like a fortress.”

Quirk’s thesis synthesizes varied disciplines as she traces the history of public gathering spaces, the basics of public architecture, as well as how the 9/11 attacks created a need for the aura of security. Secure measure became coveted aspects of a property. That comes in handy when the Mariners, or any applicant, plans designs that affect the department’s rights of way.

Quirk is applying her CHDS education on another front in the form of a proposed inter-departmental policy committee on homeland security issues. The Transportation Department manages the largest amount of land in the form of rights of way. More than other than municipal departments including the parks department. Seattle is a town filled with farmers markets, sidewalk dining and a host of other public uses. The policy committee would entail representation from the law department, city engineering and public safety.

“That’s exciting because we know that this is an issue that isn’t going away,” she said.