Cynthia Renaud was armed with years of experience and an NPS Center for Homeland Defense and Security master’s degree when she applied for the Police Chief job in Santa Monica, California, but her participation in the experimental HSx program may have sealed the deal.

Renaud was named chief in the Southern California seaside city in March, after leading the police department in Folsom, California, for seven years. 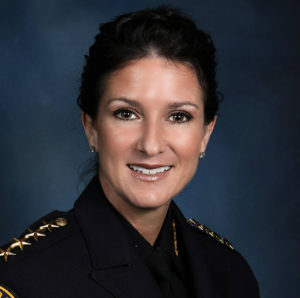 “Santa Monica is a great community with so much going on not only in law enforcement, but on the homeland security front as well,” Renaud said. “They have a solid reputation in Los Angeles County for being a sharp, professional and well-trained agency.”

The enclave of about 90,000 residents has big city challenges and is a sort of microcosm of California itself. It is brimming with high-tech startup companies alongside tourists at its famed pier and has a significant homeless population common to coastal communities in the state.

The city’s government matches its progressive social and business environment, Renaud noted, and that was part of the lure of the job. Only a few days into the job and Renaud had already participated in a weekend City Council retreat and a day-long mobility conference on transportation mode planning. Being a participant in the NPS-CHDS HSx program with its open learning and non-pedantic format helped Renaud feel immediately at home.

“Talking cross discipline, really having conversations on new ways of looking at how we can innovate in the homeland security enterprise and move forward – even how we can bring entrepreneurial tenets into the government setting – things encouraged in the HSx group – are being replicated in Santa Monica,” she said.

That became evident as she participated in the mobility conference, she added. The gathering drew multiple professional disciplines to discuss how to move all segments of society safely through the famously congested part of the state, including the emerging technologies shaping transportation planning. HSx students pursued a much similar enterprise in sessions on the future of emergency transport and infrastructure planning.

The city has set the goals of reducing crime and working with community stakeholders in combating homelessness with the goal of preserving quality of life. The police department’s Homeless Liaison Program is an eight-officer team plus a supervisor fusing enforcement with social services functions. They work closely with other disciplines and social services to steer homeless to basic services – for example, how to get an identification card and tuberculosis test, which is required to stay in a shelter.

Renaud was hired in part because she understands those kinds of complex challenges the city faces, said City Manager Rick Cole.

“Chief Renaud is a nationally respected law enforcement leader who spent the first twenty years of her outstanding career in Southern California,” Cole said in announcing the hire in March. “The selection process was a rigorous one that resulted in someone who understands and practices 21st Century policing – using technology, data and community partnerships to fight crime and the fear of crime – and building trust that Santa Monica’s Police Department will be fair, equitable, constitutional, humane and effective.”

In addition to quality of life priorities, the city deals with homeland security concerns stemming from the daily influx of tourists by the thousands due to its proximity to the Los Angeles International Airport. Renaud plans to quickly reacquaint herself with the region’s Joint Terrorism Task Force and with the Los Angeles Joint Regional Intelligence Center, the area’s fusion operation.

The move is a homecoming of sorts as Renaud began her law enforcement career with the Long Beach Police Department. After a couple of decades there, she was hired as police chief in Folsom, California, in 2011.

Renaud earned her Master of Arts from NPS-CHDS in 2010, receiving the Outstanding Thesis award for “Making Sense in the Edge of Chaos: A Framework for Effective Initial Response Efforts to Large-Scale Incidents.”  The research analyzed the National Incident Management System and suggested ways to use and train with the framework specifically during the earliest stages of an incident. The work was subsequently published as an article in the Journal of Homeland Security Affairs, which in turn led to an invitation to present the topic at a conference in Australia in 2012 to the Bays Water Fire Brigade in the state of Victoria, as well as many other conferences nationwide here in the United States. Taking academics into action, the concepts of Renaud’s thesis are now embodied in a two-week California POST-certified and DHS-certified course entitled, “Edge of Chaos.” After earning her master’s at NPS-CHDS, Renaud was part of a select group of alumni who participated in HSx, which launched in 2017.

Renaud is the third Vice President of the International Association of Chiefs of Police (IACP) and also served on the Law Enforcement Executive Advisory Committee of the United States Attorney, Eastern District of California. She serves on the California Office of Emergency Services SEMS Advisory Group and was appointed to the CLETS (California Law Enforcement Telecommunication System) Advisory Committee by former California Attorney General Kamala Harris, now a U.S. Senator.