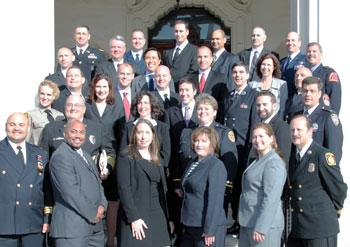 The students received degrees from CHDS as part of ceremonies at the Naval Postgraduate School. They represent a cross-section of the homeland security profession and include professionals from law enforcement, fire safety, homeland security, emergency management, social services and the military.

"These graduates bring great credit to themselves and their professions. They will join the expanding network of homeland security leaders who are shaping the future of our nation," said CHDS Director Glen Woodbury.

During the 18-month online and in-residence program, homeland security officials from across the nation collaborate on current policy, strategy, and organizational design challenges. Graduates must complete a thesis relative to their employing agency and often this research finds its way into practice and policy.

The following graduates comprise the cohort: