FEMA’s priorities during the coming year will emphasize a culture of preparedness, readiness for catastrophic disasters and reducing the complexity of its programs. 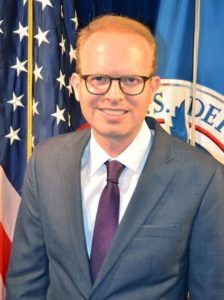 Fostering a culture of preparedness will require individual initiative along with government action. Kaniewski called for basic steps like learning how to shut off water and gas at home, checking on neighbors or even learning cardiopulmonary resuscitation (CPR).

“Insurance plays a critical role in preparedness, creating resilience and helping citizens recover from disasters,” he said. “If there is one lesson on the insurance side it’s that any house can flood.

Building a prepared society also means investing more in mitigation. Kaniewski pointed to a recently updated National Institute of Building Sciences study showing for every $1 invested in mitigation another $6 is saved on recovery costs later. He said Executive Leaders Program alumnus Roy Wright, who oversees FEMA’s flood insurance program, wants to double the number of policies in the National Flood Insurance Program by 2022 and quadruple investment in mitigation by the same year.

“We hope you will be our partners on that,” Kaniewski told the audience.

The agency wants to shift its focus to readiness for catastrophic disasters as well. According to a GAO study, more than 75 percent of presidentially declared disasters amount to less than $41 million. FEMA would like states to assume greater roles in responding to those smaller-scale disasters, a concept he called “Federally supported, state managed, locally executed.”

Kaniewski sat down with CHDS Viewpoints and provided an in depth interview on these strategic priorities, as well as some lessons learned from the 2017 disasters.