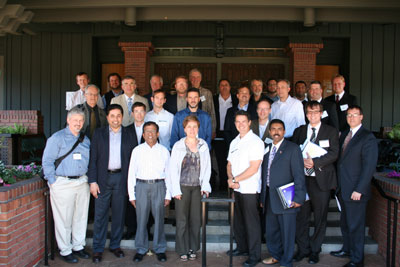 The prospect of a new electricity "smart grid" holds promise for efficiency and conservation, but will bring a new set of security concerns with it.

That was one of the messages from the Electric Power Grid Resilience Workshop May 17-19 in Monterey, Calif. The workshop was sponsored by the Naval Postgraduate School Center for Homeland Defense and Security and the Department of Homeland Security/Federal Emergency Management Agency.

Topics of the workshop included smart grid technology, how to decrease carbon emissions, vehicle-to-grid technology, cyber-exploitation and how resilience is being addressed in Europe.

Some 50 government officials, academics and private-sector representatives convened at the Hyatt Regency Hotel to discuss how to ensure the power grid’s resilience and listen to presentations that ranged from Defense Department initiatives to futuristic electric vehicles that could potentially be used to store and help regulate the flow of electricity.

One consensus was that as electricity demand continues to increase, more transmission capacity will be needed.

Power grid resiliency has become a high priority with DHS and the U.S. Department of Defense.

Certainly, the nation’s current network of power transmission and distribution is at risk from old age as well as physical threats, speakers said. However, a new set of challenges will emerge as the nation moves toward "smart grid" technology that capitalizes on digital technology beyond the computerized operations already in use. While that trend is good for efficiency and reliability, it could increase susceptibility to cyber-attacks. That means any grid updates need to be built with that kind of the threat in mind, said a leading expert on smart grid technology, Professor Massoud Amin of the University of Minnesota. "Security has to be built in as part of the design criteria," Amin said. "Otherwise, we are opening a Pandora’s box."

In order to even advance a "smart grid" more research and development is needed from both the public and private sector, he said.

To bring the smart grid of the future to fruition, Amin calls for a rejuvenated public/private partnership to fund electricity infrastructure that would increase research.

The stakes are high, as already cyber attacks have dramatically increased during the past 13 years. Amin cited statistics showing cyber attacks increased from about 2,100 in 1997 to 52,600 in 2002.

"I would say we’re one of the countries in the world with the most to lose in a successful grid attack," added Scott Pugh, of the Department of Homeland Security Science and Technology Directorate.

Electricity distribution doesn’t get the headlines of threats such as explosive devices or natural disasters, but it is an important enough asset that the Department of Homeland Security and the Department of Defense have projects in progress aimed at ensuring resiliency and stability while academics are studying ways to refurbish and rebuild an aging transmission and distributions system.

The Department of Homeland Security is examining the current status and the future of the power grid as a security issue, Pugh said.

DHS participates in war games to help it foresee how to respond to outages, notably a 2009 simulation which began with two transformers in Ohio incapacitated by a terrorist group and a subsequent cyber-attack in the southeastern United States. The war games, conducted in conjunction with utility companies, are used to help plan prevention and response.

A result of these games is concern about equipment that could be incapacitated by terrorist acts. DHS is teaming with the Electric Power Research Institute to develop smaller and lighter transformers that are assembled in three pieces that are more easily moved than the traditional ones that can weigh more than 100 tons. Most transformers were installed about 30 years ago. The good news is that they are reliable; the bad news is that dependability has led to a lack of production of replacement transformers. The manufacture of this equipment is now done overseas.

"In the post 9/11 world you have to start thinking about what happened if somebody wants to take one of these (transformers) out," Pugh said

The importance of a reliable and resilient grid has attained a heightened priority in the Department of Defense, said Mike McDaniel, Deputy Assistant Secretary of Defense and a CHDS graduate.

Two reports – from the Defense Science Board in 2008 and the Government Accounting Office in 2009 – highlighted the department’s dependence on the electricity grid and its lack of control over the grid.

In response, the department has launched three initiatives to bolster the security of its electricity supply.

The department has established an Energy Grid Security Executive Council composed of representatives from various divisions to ensure coordination of its assessment and mitigation of risk to its power needs.

Also, a series of case studies is being launched, beginning with one in Norfolk, Va., to determine the validity of critiques about the vulnerability of its electricity supply at bases and at other assets. The studies are aimed at examining electricity availability, adequacy, diversity and sustainability to ensure mission assurance.

Another case study is a three-year effort called the Smart Power Infrastructure Demonstration Project (SPIDER). This project, based in Hawaii, will explore how the department can gain electricity independence through its own generation and "micro-grids."

Lastly, a bill known as the Grid Reliability and Infrastructure Defense Act calls for identifying 100 critical energy infrastructures to assess which ones need to be defended as a matter of national security. It also directs the Federal Energy Regulatory Commission to establish guidelines to combat cyber-attacks.

Erfan Ibrahim of the Electric Power Research Institute (EPRI) discussed smart grid security and enabling a low-carbon future. The evolution of smart grids could help level the demand for electricity by using two-way energy systems to digitally control consumption at the household level. Ibrahim said a human element needed in this effort is to shift the mindset of people away from being consumers and towards becoming partners in electricity production and consumption and developing a greater awareness of how much energy they are consuming to foster greater energy efficiency in residential, commercial and industrial sectors. Smart grid technology can also reduce energy losses on the transmission lines by monitoring the voltage, current and phase at various points on the grid in closer intervals of about 50 to 60 reads per second rather than one read every four seconds that is common today. This so called Wide Area Situational Awareness (WASA) is one of the four FERC priority areas for Smart Grid reliability."

Dr. Jasna Tomic of Pasadena, Calif.-based CALSTART offered a vision of how electric cars and trucks, or even hybrid ones, could benefit smart grid technology and renewable energy use while also decreasing oil dependence.

Her presentation, titled Vehicle to Grid, outlined how what is known as V2G technology could one day help store renewable energy and sent back electricity to the power grid when the cars are parked.

"One of the reasons vehicle to grid makes sense is because of the dual use of the resource," Tomic said.

That prospect looks more promising as more and more variations of electric cars become available on the market. Tomic said one day electric cars could help send energy to the grid in times of power outages or contribute to the grid to regulate energy flow on it.

Among the challenges is prompting auto manufacturers to produce vehicles with batteries that have bi-directional capability and that have the life-cycle to serve the vehicle owners and contribute to the functioning of the grid. Also, infrastructure upgrades are needed such as a standard plug-in for vehicles and for households.

Video of the 2010 Electric Power Grid Resilience workshop will be posted on the CHDS website, under the Conferences section, in late June.