Albert Ponenti already had a big chore ahead after being elevated to Deputy Superintendent of Homeland Security and Lieutenant Colonel with the New Jersey State Police.

Among the first tasks for the master’s degree alumnus of the Naval Postgraduate School (NPS) Center for Homeland Defense and Security (CHDS) was coordinating a statewide response to Hurricane Maria in Puerto Rico. The response comprised state, county, and local law enforcement, as well as emergency and logistical planners.

“Our strategy was to deploy under the umbrella of the New Jersey State Office of Emergency Management and develop an incident command structure with a focus on planning, operations, communications, intelligence gathering and information sharing, and logistics,” Ponenti noted.

From September 29 through December 2, the New Jersey Puerto Rico Integrated Response Deployment Effort (NJ PRIDE) sent four waves of more than 100 responders per wave in two week intervals. Planning logistics was no simple task as deploying to an island territory required bringing the needed transportation along as well. In this case, air and barge transport was used to send 28 vehicles and other equipment.

“At first it was also difficult for us to establish our own base of operations and a specific mission, as well as dealing with a language barrier but through strong leadership we were able to identify our base of operations and our mission requirements. We were responsible for traffic control, target hardening, and critical infrastructure security, Ponenti said. “We also supported the Puerto Rico police with humanitarian efforts by handing out water, food, and other supplies.”

NPS-CHDS and the New Jersey State Police have enjoyed a longtime relationship that has resulted in numerous alumni holding key positions within the agency. That would prove fruitful in Puerto Rico.

Captain Tristin Collins, a master’s degree graduate, was the incident commander for the entire three week deployment to the U.S. Virgin Islands, commanding 25 troopers and integrating with the New Jersey EMS Task Force as a force protection element. Alumnus Lt. Christopher DeMaise played a critical role as Logistics Chief during the third deployment while Senior Policy Advisor Raymond Bisogno played a critical role coordinating interaction and planning with other state, county, and local law enforcement agencies. The work was part of an Emergency Management Assistance Compact (EMAC) request that has benefitted New Jersey in its times of need.

“Selecting strong leaders who you can count on as ‘boots on the ground’ commanders was also critical to our deployment’s success,” Ponenti noted. “Having this authority, it didn’t take me long to dip into some of the best qualified strategic thinkers in our organization who also possess NPS-CHDS master’s degrees.”

Beyond large scale events calling for interagency collaboration, Ponenti’s new position oversees two major components of homeland security. The Special Operations Section comprises operational and tactical elements such as Aviation, Marine, SWAT, SCUBA, High Angle Rescue, K9, Explosive Detection, Target Hardening, and Transportation Safety. The other section is the Emergency Management Section in which he serves as the State Deputy Director of the Office of Emergence Management and oversees all facets of emergency management, to include the state Urban Search and Rescue Team, and Hazardous Materials Response. 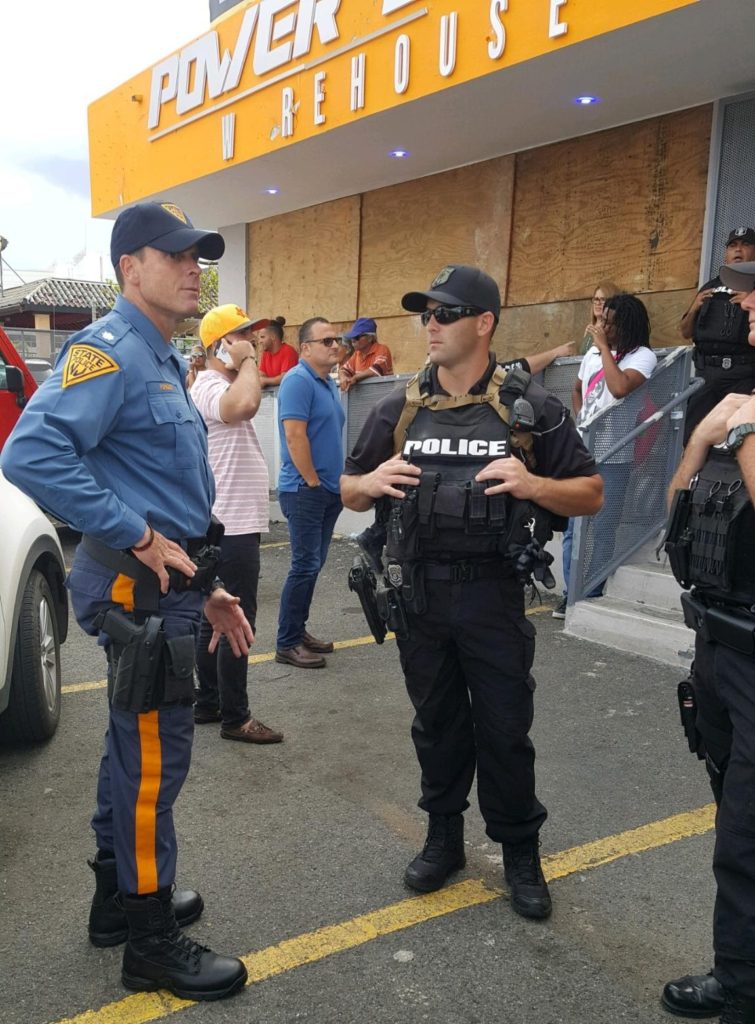 As far as threats go, the state stays vigilant for coastal storms and hurricanes, such as Super Storm Sandy, while leveraging partnerships with the emergency management community. And, its proximity to New York City terrorist acts are a constant concern.

Critical thinking skills that were enriched while studying at CHDS have been beneficial while working at the strategic and policy level, he added.

“Reflecting back on my CHDS education, if I had to select one element that has helped me in this assignment it would be to think strategically and take a step back from the operational and tactical components,” Ponenti noted. “Our deployment to Puerto Rico only enabled me to take a down and back flight onto the island during our initial deployment.  It wasn’t my job to be the on the ground commander anymore but rather be back in New Jersey establishing our policies, procedures, and strategy to ensure our deployments were covering all the bases in order to be successful.”

NOTE: This story is part of an ongoing series on how NPS-CHDS alumni respond to disasters around the world. Please share your story by emailing Strategic Communications Director Heather Issvoran at hisvoora@nps.edu