Naval Postgraduate School Center for Homeland Defense and Security alumna Cathy Lanier was the guest speaker as 58 participants completed a Master of Arts in Security Studies from the Center December 15.

The CHDS participants were among 396 graduates during the ceremony in King Hall on the Naval Postgraduate School campus.

A record 57 CHDS participants were among 396 graduates for the Naval Postgraduate School graduation ceremony December 15.

Lanier, chief of NFL security, earned her CHDS master’s degree in 2005, two years before she was named chief of the District of Columbia Metropolitan Police Department.

Reflecting on her time at the Center, she told graduates that an NPS degree carries with it a responsibility to the country and cited CHDS Director of Academic Programs Chris Bellavita.

“What Chris [Bellavita] and the faculty at the NPS do better than anyone else – is force you to create what doesn’t exist,” Lanier noted. “They teach you how to use collaboration and innovation to solve problems; sometimes before anyone else is even thinking about them.” 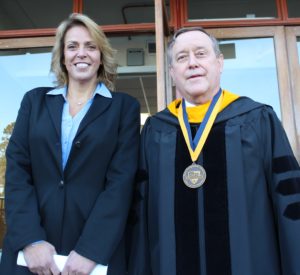 “These graduates will join a national cadre of cohorts who are helping keep our nation safer,” CHDS Director Glen Woodbury said. “We are proud and look forward to their contributions to the homeland security enterprise in the coming years. They reflect the professionalism and dedication our nation deserves.”

The first program in the nation of its kind and located at the Naval Postgraduate School, CHDS provides a leading-edge, multi-disciplinary curriculum in its 18-month master’s degree program in homeland security. Graduates are expected to write theses pertinent to their employing agencies.

Center for Homeland Defense and Security