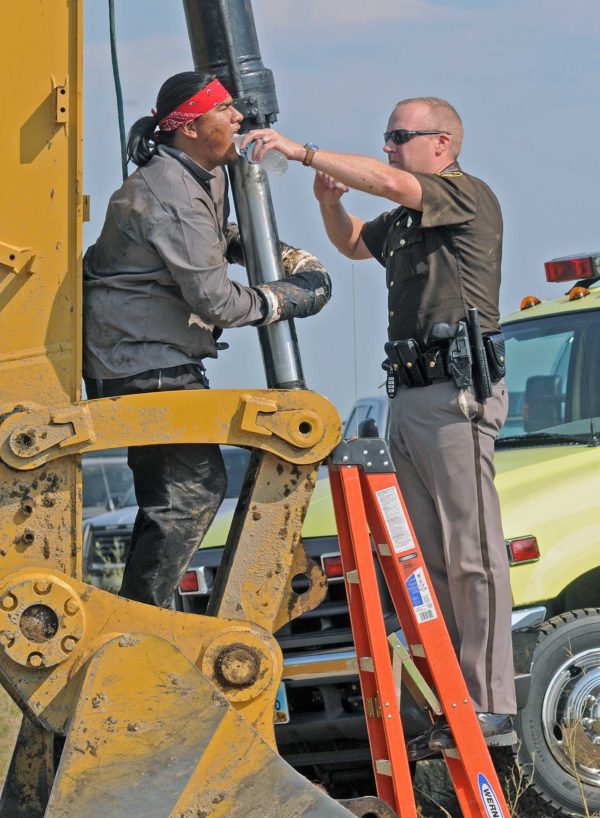 Native American tribes in the state were pushing back against the planned construction of the more than 2,000 mile-long Dakota Access Pipeline, intended to transport hundreds of thousands of gallons of crude oil daily to a storage facility in Illinois. The tribes, Standing Rock Sioux and Cheyenne River Sioux, feared a pipe malfunction could pollute their water supply.

The protests had greatly expanded by November 2016 as groups as varied as Hollywood celebrities to grass-roots environmental activists joined. What began as a local situation – officers in North Dakota like Pederson have worked with tribes most of their careers – ballooned into a national, emotionally charged issue heightened against the backdrop of a divisive presidential election. While ostensibly about water, the protest also raised issues of private property rights, U.S. treaties with Native Americans, and historical inequities.

“This happening in rural North Dakota proves that it can happen anywhere,” Pederson said. “It shows me the curriculum at CHDS applies to anybody in the U.S. regardless of whether they work in a rural area or a big metropolitan agency. It’s the same game.”

A standoff of sorts ensued over 233 days. During that time Pederson worked everything from crowd control donned in riot gear to the Planning Chief at the State Emergency Operations Center. The State Patrol’s goal, he said, was ensuring safety on all sides of the debate as the crowds grew. The original protesters were joined by outside groups with varying agendas, and in some cases counter-protesters were an additional safety concern. Much of the discord stemmed from long-time tensions between Native Americans and the federal government, which the state could not remedy. The protest camps were successfully cleared in February 2017.

“A lot of people like to frame it as law enforcement against the protester’s, it wasn’t” Pederson said. “We were concerned about safety across the board.”

Using the Emergency Management Assistance Compact (EMAC) also proved critical. Crowd size was estimated at 8,000 in the protest camps, a significant number of people for a state of North Dakota’s population.

“Our EMAC partners were critical. We couldn’t have done it without them,” Pederson said.

“It was all absolutely applicable to what I have been learning,” said Pederson, who is scheduled to graduate in September of 2018. “Some of the information I picked up at CHDS I could bring back to our unified command, and we could incorporate it into our planning.”