NPS-CHDS master’s degree alumnus David Matthew found a way to apply his thesis research deep in the desert of Utah.

Matthew, a 2007 graduate, was a participant and co-author of a report on a years-long study examining the impact of a catastrophic release of a 90-ton railcar of toxic inhalation hazard materials into an urban environment, particularly chlorine and ammonia, and developing mitigation measures to reduce the impacts on affected populations and infrastructure.

The Jack Rabbit Project, as it was called, was conducted in collaboration with the Department of Homeland Security, its Transportation Security Administration and the U.S. Fire Administration, along with the Interagency Board, Chemical Security Analysis Center, Lawrence Berkeley National Labs and Utah Valley University.  Matthew was one of six subject matter experts co-authoring the recently released final report, Jack Rabbit II. 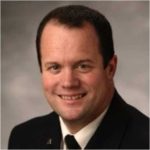 “The Jack Rabbit II program offered the opportunity to put theory into practice, as it relates to my NPS thesis,” he noted. “My experience at CHDS from 2005-2007 evolved my perspective on the value of planning and preparedness and ingrained how to achieve multiagency, multidiscipline teamwork.”

The project required collaborating with various agencies, institutions, and experts from across the nation. The aim was to gauge effects of so-called Toxic Inhalation Hazard (TIH) materials when released into the atmosphere and assess the safest approaches for an emergency response whether such an agent is leaking from a train car or intentionally released as a weapon.

In 2010, 2015 and 2016 scientists released controlled amounts of TIH at the Dugway Proving Ground.

Matthew’s participation began in February 2013 when he attended a meeting on the project at the U.S. Fire Academy, another participating agency, to review results of the 2010 experiment. This five-day meeting with more than 15 participants resulted in a Training and Analysis report offering the group’s findings, and more importantly, listed emergency response objectives to be included in any future testing.

During 2015, the experts conducted five test designed to achieve the Emergency Response Objectives and another round in 2016 that focused on additional goals that included aerial footage of the toxic release.

The results provide practical information for emergency response planners. Researchers found sheltering in place is the best survival option when an emergency evacuation isn’t possible. The study found vehicles remained operational even when exposed to high concentrations of chlorine and common urban surfaces were not significantly affected even from liquid exposure to chlorine.

“From my experience, the threat of TIH materials in an urban environment is largely misunderstood. I have observed that this lack of understanding negatively impacting strategy execution and ultimately the outcomes of the incidents,” Matthew said. “The Jack Rabbit program offers scientifically validated operational guidance that positively influences public safety planning and preparedness efforts.”

In addition, the collaborative process provided some leadership lessons similar to a CHDS classroom:

Matthew explored concepts of teamwork and leadership in his NPS-CHDS thesis, “Measuring the Foundation of Homeland Security,” which examined components of teamwork among local agencies and set forth basic elements for successful team building.

His CHDS education enabled him to broaden his professional network as he has transitioned from a member of the South San Francisco Fire Department to a sought-after expert and educator.

“Prior to CHDS, I had been fortunate to build a network of professionals that are passionate about emergency response and training of first responders,” he said. “Since CHDS, this network has expanded to all disciplines and evolved my perspective on how to effectively influence public safety and thus achieve authentic homeland security.  I have delivered many Jack Rabbit presentations at conferences and am involved in integrating its findings into national HazMat/WMD curriculums. The CHDS journey has transformed my thinking and positively influenced my efforts in public safety.”