Naval Postgraduate School Center for Homeland Defense and Security master’s degree student Craig Schwartz, Captain with the Santa Rosa (California) Police Department, believes a public agency’s drone program is as much about community trust as it is about gadgetry and situational awareness.

With about two months before graduation, Schwartz’s master’s degree thesis, “Big Brother or Trusted Allies? How the Police Can Earn Community Support for Using Unmanned Aircraft” is taking flight as he reaches out to agencies and community groups to gauge support for a drone program in the northern California city of 175,000. 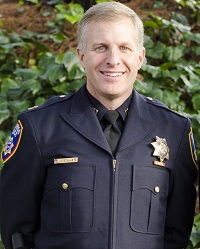 As he pored over information during the research process, he found that public sentiment was a sometimes unappreciated barrier to policy.

“The thesis became less about an adoption of technology and more about community engagement,” Schwartz said, speaking by phone after class at NPS-CHDS’s University of Maryland-Hagerstown location. “What I’m focusing on now is that community outreach piece. The agencies that have done a good job of being transparent have been successful. Departments that have created drone programs in secret haven’t fared well.”

Unmanned aerial systems hold great potential for public safety and government in general for needs such as the ability to provide situational awareness for fire and police, or damages assessments to critical infrastructure following a natural disaster, among others. The same technology concerns privacy advocates as a drone’s bird’s eye view can potentially peer into private spaces.

Schwartz’s thesis recommendations reflect the importance of community interaction throughout the policy development process. The first recommendation is a feasibility study to gauge the need for a drone program. Importantly, subsequent thesis recommendations stressed keeping the community informed by creating a robust community engagement plan that includes disparate organizations from public safety organizations to the ACLU and neighborhood groups. As part of that outreach Schwartz is reaching out to other city departments, such as Public Works and Parks and Recreation, about the benefits drones can provide. Most recently he briefed the Santa Rosa City Council on the pros and cons.

Additional recommendations include keeping elected officials and stakeholders constantly updated and engaging the community as the program is implemented. Already, Schwartz has shared the thesis with about 40 law enforcement agencies that are considering or have established drone programs.

In approaching the research, Schwartz was able to build upon and expand work by previous CHDS alumni such as Brian Smith’s thesis, “Ethics on the Fly: Toward a Drone-Specific Code of Conduct for Law Enforcement” as well as Pat Walsh’s thesis, “A Practitioners Guide to Trust and Legitimacy.”

“Some of the previous work helped determine the course and scope of my research,” Schwartz said. “My goal was to build upon what others have done and not be redundant.”

NPS-CHDS coursework has been helpful in the research process and in how Schwartz approaches his job. He commended the Unconventional Threats to Homeland Security course, taught by David Brannan and Anders Strindberg, and its discussion of social identity theory as helpful in looking at broader groups. Discussions in Rodrigo Nieto-Gomez’s course encouraged Schwartz to try new things, he said.

“I’ve been so impressed with both the people in my cohort and the faculty and staff,” he said. “CHDS has opened me up to some new ideas and opportunities and helped me understand my place and the place of other agencies in the homeland security enterprise. It has made me hungry for what comes next.”