Frustrated with the lack of initial interagency willingness for an investigation into auto thefts and burglaries in the Bay Area, California Highway Patrol Lt. Jason Reardon told a district attorney, “It will be a cold day in hell before we get all these agencies working together.”

Reardon, a current master’s degree candidate in the Naval Postgraduate School Center for Homeland Defense and Security, was half right. “Operation Cold Day,” as it was called, eventually involved about 1,000 law enforcement officers. The operation resulted in more than 100 arrests, the recovery of 48 stolen vehicles, and the seizure of more than 100 guns, large amounts of narcotics, along with stolen property, according to media reports. 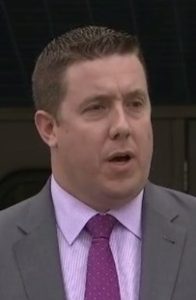 “Operation Cold Day could not have occurred without the full cooperation and collaboration of our federal, state, and local agencies,” said Daly City Police Captain Patrick Hensley, an NPS-CHDS master’s degree alumnus. “None of these partners had the resources to accomplish an operation of this magnitude alone.”

Given the scope of the operation, Reardon knew funding would be crucial, and the idea emerged that a federal agency partnership would be most feasible. That led to ATF participation and eventually local agencies followed. The operation reflected a new investigative strategy to address a shift in how street gangs finance themselves. Gangs are moving away from the potentially harsh prison sentences of drug dealing to the less punitive and still lucrative modes of auto theft and burglaries.

“They know those crimes aren’t considered serious anymore,” Reardon said. “They have a saying, ‘property crime – do no time.’”

That doesn’t make the gangsters any less deadly or violent: Guns are still tools of the trade. Undercover operatives lured would-be defendant by buying weapons and vehicles.

“These controlled purchases were very dangerous and considered high-risk operations for the undercover operatives and the support personnel,” Hensley noted. “Many of the targets had prior convictions for violent crimes and some were documented gang members.”

Hensley is a Captain in his department and serves as Field Operations Bureau Captain responsible for motor and patrol divisions. The Daly City Police Department, which has 110 sworn employees, dedicated a full-time officer to the task force, provided additional detectives, task force agents and members of its street crimes team to the task force, Hensley said. Undercover operatives began making controlled purchases of firearms, narcotics, and stolen vehicles in Daly City and surrounding cities over an 18-month period. 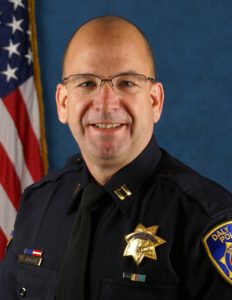 Hensley credits the CHDS master’s degree program with broadening his perspective on the value of “diversity in thought” and what it takes to work in an effective, collaborative team environment. His thesis, “Shades of Gray: Releasing the Cognitive Binds that Blind Us,” examined how to mitigate cognitive bias in the intelligence community and was illustrative of the teamwork necessary to Operation Cold Day.

CHDS coursework was also beneficial. The Technology for Homeland Security class was helpful as the task force employed advanced technological tools while the Critical Infrastructure Protection course provided a foundation as the task force built in redundancies as risk mitigation measures during operations.

“CHDS taught me the value of a maintaining a global perspective,” Hensley said. “Just as the war on terrorism cannot be won by a single government, our ability at the local level to combat violence involving firearms cannot be won without assistance from our federal and state partners who bring additional resources to the table.”

Reardon is the Commander of the Investigative Services Unit for CHP’s Golden Gate Division, overseeing about 40 sergeants and detectives who investigate cases in the nine-county San Francisco Bay Area. He also a Terrorism Liaison Officer, and conducts Critical Infrastructure Threat Analysis in the Bay Area. As he heads toward completion of the CHDS master’s program, courses such as Unconventional Threats to Homeland Security and Critical Infrastructure Protection have been especially applicable to his job responsibilities. The CHDS the experience has expanded his comfort level in working across disciplines, he said.

“The program gives you more comfort to reach out and work with people from other agencies who have similar goals,” he said. “You can multiply your effectiveness by working together. That’s the biggest takeaway I’ve had from CHDS.”