Madia retired as a Captain with the Inglewood (California) Police Department in 2014 and his police work collaborating with outside agencies and businesses, including overseeing the transport operation of the decommissioned NASA space shuttle Endeavour in 2012, led to interacting with utility personnel. With retirement from law enforcement looming, Madia made a career move at age 52 and is happy he did. 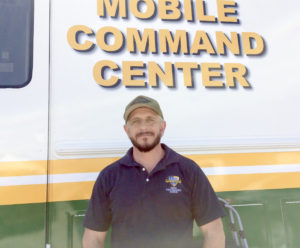 One common goal of both professions is keeping southern Californians safe. In the case of Southern California Edison, Madia’s job is ensuring the region’s infrastructure keeps humming come fire, heat or Pacific-blown storms. His first post with the company was in the Watch Office working on an intelligence team.

“The office works very similar to a fusion center,” he said. “It is a combination of analyzing internal and external information and we put out a daily intel report to decision makers across the company.”

After about 18 months on the intelligence team the opportunity arose to join the emergency management program and run the center in the role of Emergency Operations Center Manager. In this role he writes the company’s emergency response communication plans, incident management program procedures, and oversees the newly renovated 4,500 square foot Emergency Operations Center. The EOC features state-of–the art monitors and radios along with pods designed for each component of emergency response. For major events, the utility has trained more than 500 responders, divided into 24 teams.

“I serve as a coach for the teams,” Madia said. “These are folks that work for Edison in different roles, have learned the world of emergency management and fused it with their experience in the electric utility world. I wasn’t necessarily interested in staying on as an intelligence analyst for the long haul but wanted to help SCE develop something that wasn’t in existence prior to my arrival. We accomplished that. Now I focus on the response mission. We’re still building sophistication into our response program.”

Among the biggest threats facing the system is heat. Aside from straining the grid during Southern California summers, the heat frequently corresponds with wildfires that can disrupt service. Last year, Madia participated in a flyover of the Sierra to inspect tree mortality stemming from a prolonged California drought that depleted the water supply. The company also sends liaisons to firefighter camps during wildfires to provide technical and hazard information.

“Heat is something we worry about a lot, not just the immediate problems associated with a hot day or week but also over the long term,” said Madia, who in his spare time is a doctoral student at the University of Southern California, said. “We’ve done a lot of work to plan for the issue of climate change.”

CHDS course discussions about the intelligence cycle and producing reliable intelligence products were exceptionally salient as he joined the utility.  The course on critical infrastructure protection was also key to success in his new role.

“The emphasis at CHDS on the usefulness of intelligence is something that we use every day here,” Madia said. “Understanding complexities and interdependencies is a core value at CHDS that is woven throughout the curriculum. Edison relies in large part on natural gas for power generation and electricity is needed for water systems, so there are many interdependencies among the CIP sectors.”

Equally important is the class composition of master’s degree cohorts that entail varied professions of the homeland security enterprise. Collaboration is critical and building relationships ahead of the next catastrophe is essential to a sound response.

“What you learn at CHDS about emergency response is the importance of working with other agencies and relationship building before large events,” Madia said. “That was something that was stressed in our education. It sets a strong tone for interworking relationships. Today, I live on that idea.”