Leeb, Battalion Chief with the FDNY, presented elements of his CHDS research at the International Tall Building Fire Safety Conference held in London June 19-21. The event gained heightened interest as it was held just days after the Grenfell Tower fire that left at least 80 dead. His presentation on policy considerations for tall residential and commercial buildings incorporated his work on how multi-story buildings have a proportional impact to surviving cardiac arrest, a topic that entails the fire service, EMS, hospitals, architecture and even the average person on the street. 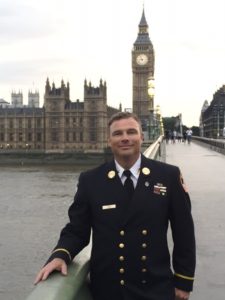 “I was talking primarily about tactics, but I was also able to speak about construction and design of buildings,” Leeb said. “It’s not only important for firefighters but for the medical community and the public.”

New York is nearly synonymous with the term skyscraper and a burst of construction is fueling building projects not only in packed Manhattan, but in the other boroughs in the city as well. At least 30 are currently under construction, Leeb said. In addition to discussing smoke control and alternative firefighting tactics, his discussion in London addressed the importance of embedding safety features in the design process and during construction when workers are on site before such safeguards are in place.

To the point of his thesis, structure height is directly proportional to survival rates of cardiac arrest. Leeb cited a study in Toronto that showed alarming results for cardiac patients. “During the study period (2007–2012), there was a less than 1-percent survival rate for patients above the 16th floor and zero survivors above the 25th floor. The study revealed a 20-percent increase in the annual rate of cardiac arrests in private residences during the study period,” he wrote.

Adding to the troubling statistics was Leeb’s own experience of losing a brother to cardiac arrest, before medical personnel could treat him, 20 years ago.

“When I ran into this data that there is a gap where responders can’t get to everybody, you need the public to be the first responders if you really want to save lives,” he said. “This issue very quickly became near and dear to my heart.”

The thrust of his thesis’ recommendations center on spreading knowledge about how to perform Cardiopulmonary resuscitation (CPR), for first responders and civilians alike. Leeb suggests agencies develop a baseline survey identifying the portion of residents in their jurisdictions who know CPR (saturation survey) and then crafting training programs based on the results. He also cites a wealth of apps, some that can be used to teach CPR and others that use GPS technology to notify trained civilians when someone nearby needs CPR. Coupled with the knowledge, it’s important that bystanders take action rather than waiting for another person to act, he said.

“It really comes to training citizens and them willing to get involved.” he said.  “The old adage of when you assign anybody to do job no one does it is true.”

A quartet of CHDS courses were exceptionally beneficial as he pursued his research. Leeb credits the Intro to Homeland Security as setting the tone for critical thinking skills that are necessary to succeed in the program. The Technology for Homeland Security class helped identify useful and emerging technologies and the course on critical infrastructure protection redefined his view of essential public and private services.

More recently, he has used lessons learned from the Comparative Government in Homeland Security course to analyze building standards in various nations and provide recommendations to his own agency. One key lesson from his CHDS study was the ability let the research progress without bias.

“You really let your research guide where you go.”  Leeb said. “Any research you do along the way is not wasted because you never know when it will become extremely valuable. I have seen that happen several times since I graduated where there have been implications outside of the issue you’re studying.”