For the past 16 years in his position, Andreasen has preached a preparedness message when it comes to hurricanes. He has seen firsthand some of the most destructive, that being Hurricane Ivan in 2004 and the threat of 2016’s Hurricane Hermine. 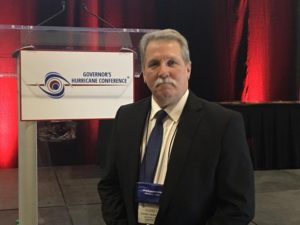 “The most memorable one for me was Hurricane Ivan in 2004,” Andreasen recalled. “Nobody believed we were going to be impacted by the storm and felt it was going to swing past us and move over toward Pensacola, Florida. The track did eventually take that direction but we caught the worst portion of the storm on the upper right quadrant, where the severe storms, heavy rain bands and tornadoes were located.”

Fortunately for some residents, through experienced intuition and excellent relationships with the National Weather Service in Tallahassee, Andreasen knew his department wasn’t overhyping the danger. Although the county had no certified shelters, Andreasen weathered intense criticism and requested an evacuation of all trailer parks, manufactured homes and home subdivisions because of the threat and for person’s to move out of the area to safer locations.  There was a push to use a building that was not certified for a hurricane sheltering as a shelter, but Andreasen held his ground and requested the evacuation.

About 36 hours later, one, and possibly two, EF 2 tornadoes touched down in the county destroying two trailer parks, heavily damaging several housing subdivisions and causing more than $20 million damage to the federal prison located there.

“The facility that everybody felt should have been used as a shelter took a direct hit” Andreasen said. “Most in the shelter would have been killed and many severely injured from flying debris.  Several counties near us did not evacuate personnel and one county lost four people in the ensuing tornadoes. We sustain more damage that the other counties total and lost no one because of the actions we took.”

For Andreasen, Ivan reinforced his belief in preparedness as well as his concern about short recall among the population, a phenomenon he calls “hurricane amnesia.” Over time, the event fades into memory and people become complacent until the next catastrophe strikes.

“A challenge is getting people to take actions themselves,” Andreasen said. “We try to impress upon people that the first 72 hours is on them. First responder personnel will be working to get the injured taken care of first and everything else comes after that.”

Andreasen was exposed to the emergency management profession while in the U.S. Air Force, which he served for 21 years. One of his last assignments included serving as a unit emergency manager for his school located at Keesler Air Force Base. He was tasked with preserving a set of historical artifacts for the school at the base.  Not only did that set him on an emergency management path, he would later find out after leaving the service that those artifacts had survived Hurricane Katrina despite the building being underwater.

His career credentials were complemented by his CHDS degree, which he credits for teaching him to examine problems from varied perspectives and to think innovatively and critically. Among the most useful benefits of the degree has been his thesis which lead him into researching active shooters and how to survive them, a topic he has gone on to lead workshops about.

“The professionalism and knowledge that is exhibited by the school, the teachers and the support staff is second to none,” Andreasen noted. “It is an academic package of instruction that cannot be duplicated anywhere else.  To attend and graduate from NPS-CHDS is a privilege and an honor.  It has established a network of people working together to solve common and complex problems we find at every level of government and at every level of the community.”