The 16th iteration of the Center for Homeland Defense and Security’s Fusion Center Leaders Program highlighted the increasing roles of sophistication and understanding in employing domestic intelligence collection, analysis and reporting techniques as 29 participants completed the week-long program on March 10 at the Naval Postgraduate School. 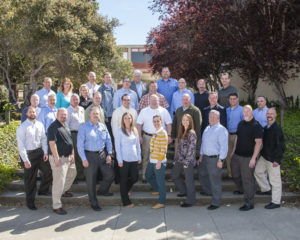 “Methods used by fusion centers are changing to meet increased threats,” Simeral said. “Recent terrorist events both domestic and overseas (San Bernardino, Orlando, Paris, Brussels, Westminster London) have demonstrated that a National Network of Fusion Centers is essential for preparedness, safety and security.  Fusion center leaders know they must step out to address increasing domestic threats and FCLP provides a venue to share smart practices and methods to take back to individual fusion centers and employ in the national network.”

The FCLP is known for its speakers who are renowned academics and practitioners that discuss emerging issues and offer-hands on learning. Ryan Walsh, Deputy Director of the Boston Regional Intelligence Center, said a presentation from Dr. Erik Dahl, a  Naval Postgraduate School professor and CHDS instructor, was helpful in that it required members of the National Network in the course  to self-assess its performance.

“This generated a good discussion of how we measure success in this field and what benchmarks will be appropriate for intelligence success in the coming years, which is something I have not previously thought much about,” Walsh said. “Dr. Dahl also presented us with some important factors he sees as driving the National Network forward in the coming years, some of which I had not considered previously.”

Presentations on various intelligence requirement methodologies and on strategic collection were also germane.

“The most directly tangible knowledge that I gained in this course was different ways to think about the intelligence process overall and how we can improve our process locally to make sure we are staying current on the most pressing issues of the day for our local customers,” Walsh noted. “I think we will be taking a closer look at exactly what our customers expect of us and ensuring we are meeting their needs using the different techniques that we discussed during the course.”

“It was also helpful in discussing the question of ‘am I growing good analysts?’” Martorana noted. “That is a question that managers wrestle with frequently.”

She hopes to implement a similar customer survey that was discussed in a session led by Las Vegas police Sgt. Dori Koren to help her agency frame what its local law enforcement partners are seeing in their respective areas of responsibility. Martorana added that FBI Supervisory Intelligence Analyst Meredith Young’s presentation of meeting customers’ needs helped her understand the need to frame specific intelligence questions for each audience as well as the need to impose a rigorous methodology to substantiate analytical judgments.

“I really like the specifics where it gets down the granular level and says ‘this is how you do this, these are the things you need to be doing, ’” Johnston said.

“Not every speaker has drunken from the trough that is the fusion center,” Johnston said. “I think that is really helpful to stimulate some discussion and some thinking about whether are we doing things for the right reasons. The process of getting down in the dirt and getting very specific about stuff has really been helpful to me.”

The FCLP is sponsored by the Department of Homeland Security and was developed based on input in partnership with the Office of the Director of National Intelligence and Federal Bureau of Investigation, as well as state and local partners through the Criminal Intelligence Coordinating Council and the National Fusion Center Association.