“In many ways, your group here is much like our military students,” Route said. “You come here and bring your operational experience with you. You know the right questions to ask.”

The event included somber memorials to alumni Michael Fahy and David Longshore, who passed away during the previous year. In addition, the CHDS Founders Award was bestowed on William Kelley, one of the Center’s founders, and Stan Supinski, who developed the Center’s University Agency and Partnership Initiative. 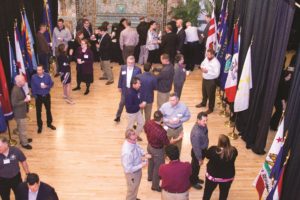 APEX provides opportunities for alumni to catch up and engage in informal discussions. (Photo by Guadalupe Javier Baltazar /CHDS)

A wide array of presentations focused on illegal immigration from predominantly Muslim nations, critical infrastructure protection, the sociological process of radicalization, cybersecurity and an update on operations at the Federal Emergency Management Agency.

Among the new educational programs at CHDS is what is being dubbed the Emergence Program, scheduled to launch in March 2017. The program is targeted at rising homeland security professionals in the early part of their careers.

A second program that is in the formative stages, called Advanced Training in Homeland Security, would target long-graduated alumni for an intensive, 18-month, graduate-level course. The first in-residence for this program is scheduled for September.

“We are taking all of our programs, our most innovative thinkers to explore horizons of homeland security untraveled,” Woodbury said. “Our idea is not to teach what the next generation of homelands security needs will be, but work together to identify problems and solutions in way no one has ever imagined.”

CHDS Executive Leaders Program alumnus Scott Kelberg, Assistant Director of FEMA’s National Education and Training, gave an update on the agency and its transitions to a new presidential administration and looking back on actions during 2016. Those actions include:

In addition, Kelberg noted the importance of CHDS education and to nation. Recalling his first day as an ELP participant, he said the former CHDS director told the group to look around the room because classmates would be future leaders.

“Little did I know that the speaker that day, Tim Manning, would become FEMA’s Deputy Administrator for Protection and National Preparedness and one of my bosses,” Kelberg said. “So many of you may become part of the leadership in this administration or future administrations. The talent and expertise in this room is unbelievable and I appreciate everything you do.”

For in-depth coverage of APEX 2017 presentations, be sure to read the spring edition of Watermark, the alumni magazine of CHDS.