Gregg Favre knew he had to hit the ground running in his new post as Deputy Director and Chief of Operations for the Missouri Department of Public Safety when Gov. Eric R. Greitens appointed him to the position on Jan. 2.

The Naval Postgraduate School Center for Homeland Defense and Security master’s alumnus and former St. Louis Fire Captain was prepared. His CHDS education had already groomed him for the responsibility of overseeing six agencies and two commissions, responsible for the protection of more than 6 million people, utilizing a near one billion dollar budget. 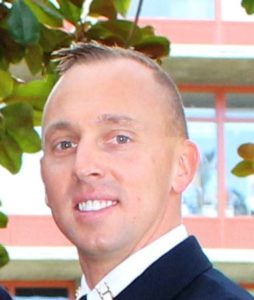 “In discussing my possible appointment, the governor was certainly interested in the role NPS-CHDS played in my career,” Favre said. “The department of public safety is large and diverse. Senior staff needs to be able to work through complex problems sets that impact the operations of the State Patrol, the National Guard, the Fire Marshal’s office and several other sizable agencies. In my interview I noted that the CHDS program was built on training the strategic vision that is required to be successful. CHDS provides an opportunity to work on complex, wicked problems that often don’t have a defined start or end point, much like we see in the real world.”

On his first full day on the job, in between filling out employment forms and finding the coffee maker, weather forecasts were predicting a major ice storm would sweep across multiple states with hazardous conditions expected to last through that weekend.  That afternoon Favre was called to the governor’s office.

“Keep in mind that the governor is barely into the third day of his first term,” Favre recalled. “This was our first real test, not only for the new Public Safety leadership, but for his administration as a whole. That afternoon I worked with the Governor and his counsel to open the state Emergency Operations Center, which in turn activates the state operations plan for emergencies. By Thursday morning we declared a state of the emergency. Within the first 24 hours of this new job I went from finding my office to running the EOC, staging resources across the region, activating the National Guard and mobilizing the State’s fire mutual aid plan.”

The 17-year fire service veteran will be using his mix of experience and education as he serves to provide strategic oversight to the department’s multi-functional divisions. “My responsibility is to provide a broad, strategic guidance that focuses on improve performance and capacity,” he said. “We have nearly 15,000 dedicated members working for the protection of this state and we want to not only be sure they have the best processes, but also that we are telling their story to the public and legislature in a meaningful way.”

In addition, to his role providing strategic guidance, Favre is designated as the Senior Counselor to the Governor for Homeland Security. In this role, Favre is responsible for managing a wide variety of operations and disciplines and maintains the critical position of advising the governor on terror-related issues. 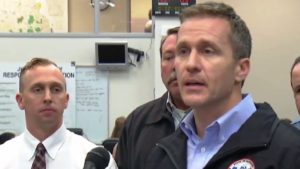 “Relative to homeland security we are dealing with many of the same evergreen issues that other states are dealing with: securing major public events, working with federal allies on critical infrastructure, and uniting with local agencies to make sure that we are being excellent partners in both our preparedness and response measures,” he said.

Working with multiple agencies on complex problems has shown the value of his CHDS experience. Favre cited the Planning for Homeland Security course as helping drive understanding to wicked problems facing complex bureaucracies. He also lauded courses such as Intelligence for Homeland Security.

“Coming from emergency management and the fire service, I relied heavily on the intelligence classes to start asking the right questions about our intelligence processes at the state level,” he noted.

Equally important, his coursework and thesis research shares a common objective to his new department – what Favre calls “mission clarity.”

“CHDS reinforced that ‘mission clarity is essential for mission success.’ From the first moments of the program – when you first walk in to the classroom – (Academic Programs Director) Chris Bellavita starts peppering you with questions that force clear thinking,” he said. “If we cannot communicate the objective, we can’t possibly achieve it. In both the course work and in the thesis process there had to be focus. Without it, you cannot succeed at CHDS. By training this clarity as a discipline in the academic setting, I feel prepared to bring it to my new command as we embrace the challenges and opportunities ahead.”