A career in law enforcement and other public safety agencies may require diverting from the homeland security enterprise for the sake of advancement, but 2006 Naval Postgraduate School Center for Homeland Defense and Security master’s degree alumnus Mark Landahl has showed how to sustain his passion for the field.

Landahl was promoted to Lieutenant and Homeland Security Commander with the Frederick County Sheriff’s Office in January. He returns to the division he founded in 2004 after serving as Supervisor of the School Resource Unit over the past eight years. The circuitous path back has not come without accolades as this past summer he was recognized by the School Safety Advocacy Council with their National School Safety Award for his work in school-based policing.

“In law enforcement it is difficult to remain in one element for your entire career,” Landahl said. “The need for varied experiences necessitates many times that you move away from work that you have found an intense passion for.”

An affinity for writing in research, whetted during his years at CHDS and as a doctoral student at Oklahoma State University, coupled with serving on various advisory bodies has kept him steeped in emerging homeland security issues.  His recent shift in duties comes as a new book, “The Future of Disaster Management in the U.S.: Rethinking Legislation, Policy, and Finance,”  has been released that includes a chapter co-authored by Landahl. 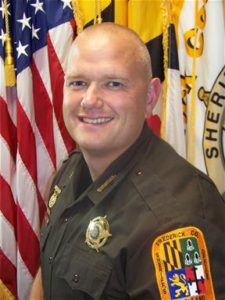 Lt. Mark Landahl of the Frederick County Sheriff’s Office has continued his interest in research and writing since graduating from CHDS.

The chapter, titled “Business as a Vulnerable Community,” stemmed from research he conducted on the 2012 G-8 Summit that examined preparedness of businesses in Frederick County and a related article that was published in the Journal of Homeland Security and Emergency Management.

“The chapter talks about issues in studying businesses for emergency management and homeland security and the vulnerability link,” Landahl noted. “It focuses much on definitional issues for research applications, but also serves as the most recent comprehensive synthesis of research on businesses in extreme events.  The chapter concludes with practical recommendations for emergency managers for engaging the business community and increasing preparedness.”

During the time away from homeland security and emergency management as a practitioner, he continued his interest in education and research in the field while serving on bodies such as the National Sheriff’s Association Homeland Security Committee, committees with the International Association of Emergency Managers, and the FEMA Higher Education Program.  During that time he also provided testimony on behalf of first responders to the Blue Ribbon Study Panel on Biodefense chaired by Governor Tom Ridge and Senator Joe Lieberman and provided input to responder oriented legislation in Congress.

That advisory and writing work will be beneficial as he oversees a division in a rapidly growing county of 240,000 in the D.C. region. The job carries primary responsibility for interagency planning for prevention, protection, preparedness and response. He will also serve as the principal homeland security advisor to the Sheriff and as the liaison to local, state and federal agencies in addition to serving as Supervisor of the Western Maryland Information Center – one of three regional fusion operations comprising the Maryland Coordination and Analysis Center.

As part of the Capitol Region lying between Washington and Baltimore, Frederick County is at the crossroads of high-profile terrorism targets and is home to the U.S. Presidential Retreat at Camp David, U.S. Army Fort Detrick and the National Biodefense Analysis and Countermeasures Center, FEMA National Emergency Training Center and dozens of other sites for military and civilian federal agencies. The county has been home to international events, such as the 2012 G-8 Summit, and 2015 Gulf Cooperation Council Summit

“It is this complex operating environment that makes the job challenging and interesting for a mid-sized Sheriff’s Office in a suburban/rural community,” Landahl noted.

In an example of his diverse interests, law enforcement is Landahl’s third career. His first was as a congressional staffer and he was later a middle school history teacher before he followed in the steps of his father, who was a deputy in New York State, into law enforcement.

“I was actually in the academy on 9/11 and really truly was not sure until then that I had made the right choice,” he recalled. “It was then I knew where I belonged and what I wanted to do. In a short time I made my way to found our homeland security section, doing a tour on the JTTF (Joint Terrorism Task Force), then spent most of my time re-developing interagency response plans for Frederick County.”

Landahl credits his experience at CHDS with sparking his interest in research and writing. He enjoys pursuing topics he has experienced in the field and applying research-based questions on a subject academia has yet to broach. After finishing his doctoral degree, he also now enjoys working with students and advising their research at the several universities he is affiliated.

“CHDS was the impetus for all of my research and writing,” he said. “I would have never started down this path without the CHDS experience. We have a duty to implement evidence-based practice across the homeland security spectrum. The evidence for practice has to come from rigorous research, the time for hunches and personal experience-based implementation has passed. The CHDS experience introduced me to the role of research that I carried forward into pursuit of the Ph.D.”

HSAJ: Beyond the Plan: Individual Responder and Family Preparedness in the Resilient Organization