Graduation ceremonies at the Naval Postgraduate School on December 16 included 29 homeland security professionals who completed a Master of Arts in Security Studies from the NPS Center for Homeland Defense and Security. 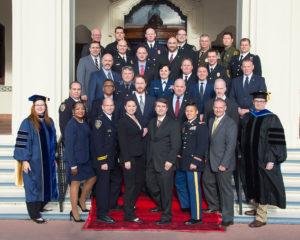 management, and the military (see attached list). The first program in the nation of its kind, CHDS provides a cutting-edge, multi-disciplinary curriculum in its 18-month master’s degree program in homeland security. Graduates are required to write theses pertinent to their employing agencies.

“These graduates will join a national cadre of cohorts who are helping keep our nation safer,” Woodbury said. “We are proud and look forward to their contributions to the homeland security enterprise in the coming years. They reflect the professionalism and dedication our nation deserves.”

• Outstanding Thesis Award: Marcus Sexton, Criminal Investigator, ICE, Homeland Security Investigations, San Antonio, for “Forecasting Our Adversaries’ Next Move: Trend Analysis and the Department of Homeland Security’s Role in the Development of Counter-Proliferation Intelligence.” The honor is based on overall academic rigor; quality of the literature review; impact of the study on homeland security strategy and future research implications; quality of analysis and conclusions; quality of organization, writing and overall presentation of thesis.

• The Curtis “Butch” Straub Award: Brian Lee, Employment Services Bureau Commander , Phoenix Police Department, Phoenix. The Straub Award is based on grades, thesis and classroom leadership. The award is in memory of one of CHDS’ founders.

ABOUT NPS: The mission of the Naval Postgraduate School is to provide unique advanced education and research programs in order to increase the combat effectiveness of the U.S. and Allied armed forces as well as enhance the security of the United States. For information, visit www.nps.edu.