Pioneering terrorism scholar Bruce Hoffman brought his highly regarded expertise to the Naval
Postgraduate School’s Center for Homeland Defense and Security on December 1, sharing his assessment of challenges facing the next presidential administration from extremist groups such as the Islamic State, al-Qaida and myriad off-shoots.

For two hours, master’s degree students in the Unconventional Threat to Homeland Security course were briefed as Hoffman elaborated on observations and insights on “The Global Terror Threat and Counterterrorism Challenges Facing the Next Administration,” published in the current issue of the CTC Sentinel. 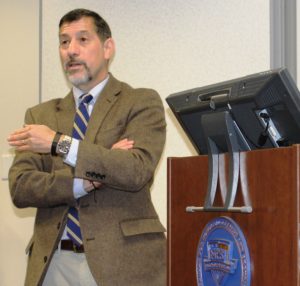 His message was a sobering one for a nation that has spent billions to thwart the spread of Islamic-related terrorism. First, it is a mistake to believe that al-Qaida is defeated. Also, even if the Islamic State were to lose its current territorial base, its ideology has spread to other countries and it boasts foreign fighters primed for attacks upon returning home. Defeating these groups will require more than simply killing its leaders.

“We need to accept that this is a generational struggle,” Hoffman said. “This is an enemy that is remarkably determined and has been more resilient than we imagined.”

While the authoritative content was salient, equally important was the style of researcher Hoffman represents, said Dr. David Brannan of the CHDS instructional staff. For 40 years, Hoffman has traveled to various conflict zones to extract ground-level, primary source information.

“This is not the normal kind of researcher you find on the banks of the Potomac,” Brannan said.  “You don’t normally find internationally renowned scholars with his level of credentials getting shot at to get information about al-Qaida in Iraq. That is the kind of practitioner-scholarship the Center aspires to instill in its students.”

In addition to his groundbreaking study of theologically driven terrorism, Hoffman has left a less direct, but nevertheless indelible mark on CHDS itself. When Brannan and Strindberg were pursuing doctoral degrees at St. Andrews University in Scotland, Hoffman was the Chair of the International Relations Department. His style of scholarship was a crucial inspiration to both as they entered into the field of terrorism studies.

While pursuing their doctoral degrees, Strindberg and Brannan began developing and applying Social Identity Theory to terrorist groups. The theory was first suggested by psychologist Henri Trajfel in 1979. Brannan and Strindberg applied the theory to their studies of terrorism. In 2001 Strindberg and Brannan co-wrote an article in “Studies in Conflict and Terrorism” that first argued for using Social Identity Theory as a base for contextual terrorism analysis.

The article initially irritated many academics studying terrorism, but Hoffman was a respected voice that validated their methodology and supported their work before the broader academic community. The concept is central to the course Brannan and Strindberg teach at CHDS.

“He understands that the enemy is not playing checkers,” Strindberg said. “In order to impact the enemy we have to take seriously about how they think about their reality and their narrative of their place in the world.”

During his two-hour presentation, Hoffman outlined the various groups that will pose threats and discussed why the U.S. strategy has failed.

Among the failed approaches has been an inability to gird allied militaries for successful battle without U.S. assistance. In current the fight with the Islamist State, successes have largely stemmed from the Kurdish Pesh Merga forces and Iranian militias, along with U.S. backing he noted. In Mali, the government could not keep pace in training soldiers to ward off Boko Haram.

Fully defeating violent groups will require military prowess beyond counter-messaging and drone strikes on top leaders and should focus on disrupting the sustainability, logistics and support of terrorist groups.

“Rolling back ISIS and retaking Western Iraq is a vital first step,” Hoffman noted. “We did that well after 9/11, but they adapted. The whole common effort of the global war on terror has eroded and needs to be rebuilt. Regional partners must take the threat seriously.”

A strategy to prevent franchises and affiliates from sprouting following military decimation is also necessary to fully snuff out terrorism he added.

The next presidential administration will likely face the dual menace of ISIS and al-Qaida during his term.  The Islamic State has morphed from a traditional terror group with its former Baathist fighters under Sadaam Hussein bringing traditional military techniques to its guerilla prowess. While increasingly pinned down on the battlefield, ISIS can boast a string of nations that can potentially offer haven to the group’s members where they can organize anew should their caliphate crumble.

But ISIS’ travails illustrate why Hoffman believes al-Qaida will be more lasting. ISIS is getting the attention and the recruits, and al-Qaida is all too happy to let it absorb the blows and bombs as it bides its time.

“They’re not laying down they’re arms. They’re constantly looking for ways to overcome the security measures we put in their path,” he said. “Just because they’re quiet doesn’t mean they’ve gone away, ‘’