Ten years after completing a master’s degree at the Naval Postgraduate School Center for Homeland Defense and Security, Susan Reinertson found a way to refresh her strategic thinking skills and expand her professional network through the Executive Leaders Program.

As Amtrak’s Vice President and Chief of Emergency Management and Corporate Security, Reinertson found that 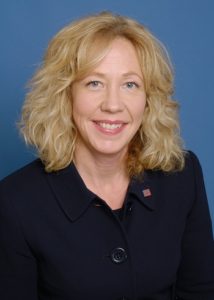 Since her 2005 graduation, homeland security priorities and issues have shuffled nationally, but the importance of strong professional networks outside one’s professional silo remains a constant requisite. Reinertson wanted to combine building contacts with academic interactions to focus on future strategy and policy.

The ELP does just that by enabling upper-level practitioners to extract themselves from daily workloads to ponder long-term strategy and policy in an environment where ideas flow.

“All the conferences I was attending were practitioner focused, nobody was helping them think beyond their current situation,” she said. “That seemed like a way to combine academia and the practitioner and fine out the emerging trends. I hoped I would find that at the ELP, and I did.

CHDS established the ELP in 2006 to provide graduate-style homeland security education to upper-level leadership in the public and private sector. Students meet for four one-week sessions, at the NPS campus, over the course of nine months. There have been a handful of students from CHDS non-degree programs who went on to pursue a master’s degree, but this marks the first time a graduate degree alumnus has returned to an executive program. (Reinertson was followed closely by William Pilkington, who earned a master’s in 2015 and is currently part of ELP 1602.)

During the course, Reinertson identified some applicable issues to her job. Prompted by the course she has begun rethinking insider threat policy. She has also reached out to the company’s Chief Information Officer about potentially updating their cyber security policy.

“When you’re with everyone for more than a day you really find the issues that are relevant to them,” she said. “You are sharing trends or best practices. We can hone in on what is important.”

Reinertson joined Amtrak in January 2010 as Chief Operations Administrator at Amtrak, following a career of emergency management related posts and highlighted by her role as Director of Homeland Security in North Dakota as well as with the Federal Emergency Management Agency. She was named to her current position in 2012 and tasked with consolidating eight emergency management-related functions into a cohesive unit for the national passenger railroad.

Fellow CHDS alumni James Metzger and Robert Grigorio joined her on the emergency management team. In October the company earned accreditation from the Emergency Management Accreditation Program (EMAP), a first for Amtrak and the first railroad for EMAP, this distinction is usually leveraged by federal, state, local and tribal emergency response agencies.

The designation “recognizes the ability of emergency management programs to bring together personnel, resources and communications from a variety of agencies and organizations in preparation for and in response to an emergency, in addition to obtaining the ability to measure those capabilities,” according to an Amtrak news release.

“The teamwork was essential,” she recalled. “We did this in a year, which is unprecedented. It was essential to stick together, stay motivated and help each other. Working with the (CHDS) graduates in my department was great because we have a shared trust and such pride in being graduates of the program.”