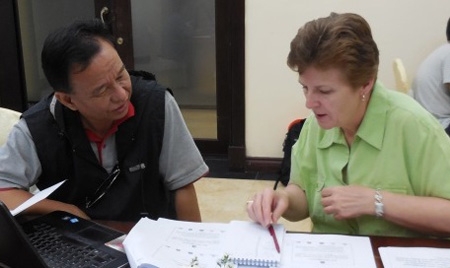 Turner, a federal coordinating officer with FEMA’s Region IV office in Atlanta, was the lead facilitator for a five-day course on disaster management topics and helped manage instructors from five nations.

The August 2009 ELP graduate was part of an 11-member team brought together to support a priority initiative of the U.S. Forest Service International Program and the U.S. Agency for International Development/Office of U.S. Foreign Disaster Assistance. The ELP was beneficial in participating in the initiative project, she said.

“The emphasis of the ELP on organizational coordination and networks led to more study and application of systems theory to Emergency Management,” Tuner said. “This was particularly meaningful in presenting these principles to a government that is in further development of their own disaster management system.”

This multinational course was held in December, 2014, in the capital city of Nay Pyi Taw and at field locations. There were presentations in three languages: English, Japanese and the native Myanmar.

The Southeast Asian nation of Burma is officially known as the Republic of the Union of Myanmar.

The USAID/OFDA program goal was to help Burma develop its first National Emergency Operations Center (EOC). To meet that goal, the course developed lessons and activities related to planning, building, equipping and managing an EOC, as well as discussions of disaster management systems.

One of Turner’s presentations used concepts developed in conjunction with another ELP graduate, Christy Grant.  Grant is the branch director for FEMA’s Individual Assistance program in Region 10 in Bothell, Washington.

“The workshop was extremely successful and far exceeded expectations,” said Turner.   “Participants were highly engaged, going out to survey potential EOC sites, and identifying needs across multiple government agencies and non-governmental organizations.”  They created both concepts and actual designs for a national EOC, she said.

Participants included leadership from the Union Ministry of Social Welfare, Relief and Resettlement and other government ministries and departments; officers from each branch of the military, fire services and police, and key disaster response partners that included non-governmental organizations and the private sector.  In all, there were 23 government ministries, 11 United Nations agencies, five international NGOs and three private sector organizations that attended the event.

The Union of Myanmar Parliament in 2013 passed its’ first-ever “Natural Disaster Management Law” to delineate how the government would prepare for and respond to natural disasters.  It was largely the result of a troubled response to Cyclone Nargis in 2008 in which 140,000 people died.

The new law creates “Work Committees” – similar to Emergency Support Functions – which are responsible for implementing response activities at the national level for both domestic and international operations.  The Operations Section will coordinate international assistance from 12 UN clusters made up of NGOs, several different types of UN teams and the regional Association of Southeast Asian Nations Coordinating Center for Humanitarian Assistance and Emergency Rapid Assessment Teams.

“An important component of working in other nations is learning about and experiencing their history and culture,” said Turner. “I was able to interact with people from at least a dozen different nations who were working in various capacities and organizations around the world.”

“This experience has been among the highlights of my career,” said Turner.