As the rate of active shooter attacks increases in the United States, a Naval Postgraduate School Center for Homeland Defense and Security alumnus is working with the Police Foundation to determine how to improve responses to these incidents. 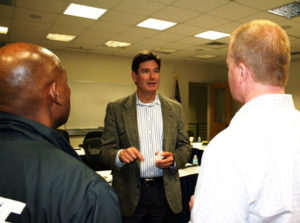 Former Sacramento Police Chief Rick Braziel is using his education as part of a review team with the Police Foundation.

Former Sacramento Police Chief Rick Braziel’s most recent contribution is the foundation’s recently released report on the December 2015 terrorist shootings in San Bernardino, California. This is the fourth report Braziel has assisted in co-authoring that reviews high-profile incidents in order to gauge what measures were successful and what steps need improvement.

“We should share our experience. It’s not just about thesis or diplomas, it’s also about what we can do afterwards,” —CHDS master’s degree alumnus Rick Braziel

“You find out things the agency may not be aware of because you have an outside perspective,” Braziel said.  “What they tell us is more full bodied than what they would tell an investigator during an interview.  We get the emotional part as well as the facts. It allows us to better advise public safety agencies based on getting the really true picture rather than just the facts for prosecution. We want to find out things that maybe they don’t know. We approach it like a sports team, the best always look at the game film to get better.”

The result isn’t a hit list of potential missteps. Foundation researchers also look for things that were accomplished successfully as well as post-incident care for responders. In the case of San Bernardino, the less publicized story is what went right despite the violence.

“The Sheriff in San Bernardino and his leadership team said they took lessons learned from the Dorner case and implemented them,” Braziel noted. “One of those lessons learned was the collaborative piece. They’re a prime example of taking a prior after action report from a couple of years ago and implementing the recommendations.  It made their response better.”

The response also illustrated the value of exercising response drills with partner agencies. The school system in San Bernardino had conducted an active shooter exercise previously that included a plethora of public safety agencies and even the media. The exercises even went through the emergency room triage portion of response, something that was based on a previous incident.

“The more people do things with each other the better they will perform when they have the real deal,” Braziel noted. “In San Bernardino, because of looking at past lessons learned, their relationships were pre-established. So they had already worked out the bugs, they did a fantastic job.”

Some recommendations are more personal. One responder was just heading to lunch but ended up being the closest law enforcement officer to the attack. The lesson? Always take your equipment. Another told the Foundation that exercises were worthwhile—he had been trained in active shooters and responded as practiced. The lesson? Take drills seriously.

The reports are aimed at three audiences. Aside from the participating agencies, the reports can be useful to the law enforcement community as a whole while also showing the public audience details and timelines of the case, such as audio from emergency calls.

Authors of the foundation reports also travel to police departments to deliver briefs in person. Braziel continues to brief departments on older events such as the 2013 Dorner case as well as the July 2014 Stockton bank heist, both violent multi-jurisdictional events.

“We have to be willing to honestly review events,” he said. “We need to celebrate what we did well but always look for things we can do better.”

This endeavor holds lessons for CHDS alumni. Braziel believes graduates of the Center should share what they learned during CHDS to better homeland security.

“We should share our experience. It’s not just about thesis or diplomas, it’s also about what we can do afterwards,” he said.