Security planning was as much the name of the game as football when Super Bowl 50 kicked off February 7 in the San Francisco Bay Area, in the city of Santa Clara, California.

An estimated 1 million people traveled to the Bay Area for more than a week of special events that required security planning for both the game and the array of concerts, parties, and other Super Bowl related activities. 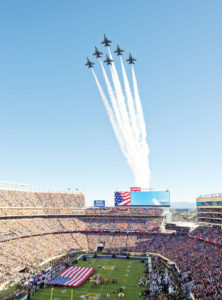 As with most major public events in the United States during recent years, NPS Center for Homeland Defense and Security alumni and students were a “most valuable” team behind the stadium lights and television cameras where they worked on areas such as emergency management planning, transportation security and intelligence. Read the full story…