Naval Postgraduate School Center for Homeland Defense and Security alumni are using their education as they lead efforts to supply beleaguered Flint with potable water and resolve the water crisis. 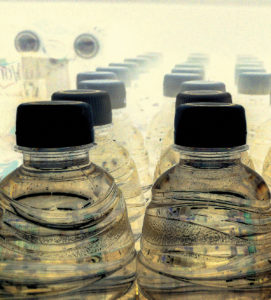 Something is in the water: plastic bottles containing water from Flint’s drinking water pipes. Photos by Keoni Cabral via flickr.com.

Michigan State Police Captain Chris Kelenske, Deputy State Director of Emergency Management and Homeland Security and Deputy Homeland Security Advisor, was part of the Naval Postgraduate School Center for Homeland Defense and Security alumni trio playing high-profile roles. Joining him was Cooley Law Professor Mike McDaniel who was enlisted by the city to plan for and oversee service line and water main replacements and infrastructure repairs and to serve as a liaison for Flint. Linda Scott has worked to support the medical and public health policy and response (ESF # 6 & 8) as the Director of the Division of Emergency Preparedness and Response within the Michigan Department of Health and Human Services.

The graduates all say concepts taught at the Center on topics such as critical infrastructure protection, networking, and framing “wicked problems” have been beneficial and along with the multi-disciplinary coursework.

“Because CHDS embraced so many different disciplines and taught the need for continuous networking, you become very comfortable with working with individuals from other disciplines,” McDaniel said.

Kelenske’s job is to implement the orders and directives of the governor, manage the state emergency operations center and integrate the state with federal partners per the Stafford Act. Perhaps more importantly for the city’s residents, he was charged with ensuring they had potable water.

“The mission has shifted to a commodities driven mission,” Kelenske said. “It falls into the category of a “wicked event” which is very complex, and with complex events we have to apply creative ways to respond. If we don’t identify them quickly and apply the right response framework we are going to have issues.”

By April, the key task had shifted to providing commodities at points of distribution supplied with water sampling kits, water filters and bottled water to residents. The National Guard was activated to assist with door to door operations to ensure all residents on the water system received water filters, he said.

“The fact that 94.2 percent of active water system customers have filters is good but, due to how the event transpired and the lack of trust in government a lot of people are still using bottled water,” Kelenske noted.

Lessons learned while studying at CHDS have been constructive, especially the course on critical infrastructure protection. He cited the textbook, “Bak’s Sandpile,” authored by former CHDS Executive Director Ted Lewis, and how a small event can cascade to a larger problem. In this case, he said, ensuring the right chemicals were added could have prevented damage to the water system and negative health impacts to the citizens.

Another helpful take-away from the CHDS program is forming relationships with diverse groups, professions and levels of governance.

“The one thing, overarching, is the diverse group involved with the CHDS courses, the diversity of local, state, federal, private and all the different entities provides different aspects of how people frame something or how they are seeing an event,” Kelenske observed. “We all know this problem is bigger than one agency. You don’t necessarily have all the good ideas yourself and others can make contributions that lead to pivotal points.”

The situation prompted McDaniel to recall his early days at CHDS when instructor Chris Bellavita asked what constituted homeland security. 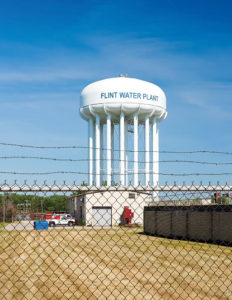 At the end of June water provided by Flint Water Plant in Michigan was tested for lead, iron, and Legionella, a bacteria that causes Legionnaire’s disease and responsible for the deaths of ten Flint citizens. Photo by George Thomas via flickr.com.

“One thing that Bellavita said that stuck with me is that a recurring characteristic of homeland security is interagency relationships,” he said. “With the City of Flint we had a situation where, due to past events, the relationship between the city and the state was fully broken and there were no partnerships, no relationships.”

That meant starting from scratch, but he used his experience: his time as the state’s homeland security advisor had required the same kind of bonding with diverse disciplines and levels of government.

“I was doing the exact same thing in January to April of this year as I did when we first stood up homeland security in Michigan,” he noted.

Like Kelenske, he also pointed to the CHDS critical infrastructure course and book authored by former Center Executive Director Ted Lewis, “Bak’s Sandpile.” Lewis argues in “Bak’s Sand Pile: Strategies for a Catastrophic World” that the systems on which society is most dependent – from the electric grid to the internet to water supply distribution – are susceptible to breakdown not so much because of external forces but because their optimized designs don’t allow for minor disruptions.

“It has been pointed out since the book was published that water is sort of first among equals among CI,” McDaniel noted. “Everything else is dependent on water, so you focus on that first.”

The water crisis in Flint dates from spring 2013 when the city changed the source of its water from the Detroit Water Authority to the Flint River. Residents began complaining about the quality of the water. It is believed the failure to add anti-corrosive chemicals to the new source resulted in lead leaching from the aging pipes and infrastructure.

It was not until January 2015 that the first public meeting was held. A local doctor named Dr. Mona Hanna-Attisha issued a report in August 2015 stating lead and blood levels of children sampled in the city were elevated. That September a team from Virginia Tech University found the water supply contained high lead levels.

While replacing the water infrastructure the city is moving to refurbish other aging, underground piping and cabling while the ground is turned.