Master’s degree alumnus James Robinson was part of an inter-disciplinary committee of the National Academies of Sciences, Engineering and Medicine that is urging improvements to the nation’s trauma care continuum through consolidated leadership for trauma care, and the integration of military and civilian trauma systems, building on the success of the military over the past 15 years.

The report and recommendations, “A National Trauma Care System: Integrating Military and Civilian Trauma Systems to Achieve Zero Preventable Deaths After Injury,” was released in June. The committee envisions a nationally coordinated “learning trauma care system” that addresses patient-centered care from the point of injury 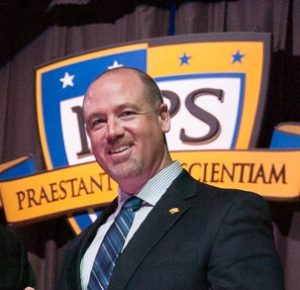 through the return to daily living for victims of trauma, and recommends that the White House set a national aim of zero preventable trauma deaths after injury.

That is familiar ground for Robinson whose in-progress CHDS master’s thesis Emergency Medical Services and Its Role in National Preparedness,” is addressing similar concerns.

A 27–year veteran in his field, Robinson is Assistant Chief for Denver Health EMS, the 911 Emergency Medical Services (EMS) agency for the city and county of Denver. His background and CHDS education fully prepared him to contribute to the 20-member committee.

“The critical thinking and systems thinking that I learned at the Center were probably the most beneficial things,” said the 2015 graduate. “The Bardach policy analysis book that Dr. Bellavita assigned in intro class was helpful, and is the framework through which I am evaluating policy in my thesis.”

Class discussions that centered around “system of systems” concepts were directly applicable.

“The trauma system is really a system of systems,” Robinson said. “It is hyper-complex and has multiple failure points.”

Improving trauma care is a national preparedness and a homeland security issue, he explained, especially with recent upticks in active shooter attacks and even using vehicles as implements of destruction, as was recently seen in Nice, France. The committee estimates that with optimal trauma care, as many as 20 percent of the 147,790 U.S. deaths from trauma in 2014—nearly 30,000 in a single year—may have been preventable.

“The more we see mass casualty incidents, and more recently the potential for low-tech terrorism, the ability to handle those types of incidents is directly related to our preparedness in trauma services,” he said.

The report notes other societal impacts of trauma in the civilian sector: It’s the “leading cause of death for Americans under the age of 46 and in 2013 alone, was associated with an economic cost of approximately $670 billion in medical care expenses and lost productivity.”

“Both the military and civilian sectors have made impressive progress and important innovations in trauma care, but there are serious limitations in the diffusion of those gains from location to location,” said committee chair Donald Berwick, president emeritus and senior fellow, Institute for Healthcare Improvement. “Even as the successes have saved many lives, the disparities have cost many lives. With the decrease in combat and the need to maintain readiness for trauma care between wars, a window of opportunity now exists to integrate military and civilian trauma systems and view them not separately, but as one.”

The recommendations center on a three-pronged effort. Because of that, the committee recommended the White House take the lead in establishing a national trauma system. Presidential leadership will be required, the committee believes, as a pillar of the plan calls for collecting data from civilian and military trauma operations spanning every step from the first point of EMT contact to rehabilitation after a hospital stay. Additionally, the committee urges collection and standardization of best practices stemming from the military.

“It’s a pretty ambitious goal, so we recognized it requires leadership at the level of the White House to be able to set the aim, to coordinate the stakeholders and to and compel the executive branch departments to makes the necessary changes,” he said. “While that’s an ambitious goal we felt it was something that was achievable, based on the military’s experience.”

The wars in Afghanistan and Iraq sparked battlefield innovations in trauma care that decreased deaths of wounded by 50 percent between 2005 and 2013, the report noted. Unhindered by bureaucracy and traditional clinical trials, soldiers could focus on saving lives using their own ingenuity and experiences- what the military calls “focused empiricism.”

Those wartime improvements have translated in some cases to better civilian trauma care. Responders credit using tourniquets, an approach revived and perfected during those wars, with improving the survival rate at domestic attacks such as the 2013 Boston Marathon.

“Through the course of the committee’s work, I learned that the most impactful life-saving improvements in the military trauma system have been in the pre-hospital realm, and since I have spent my career working in this phase of care, I was encouraged that maybe we can make a big difference by improving the things we do before patients reach the hospital.”