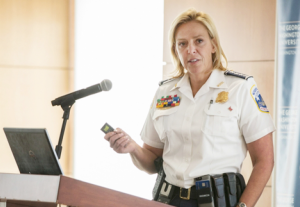 District of Columbia Police Chief Cathy Lanier, a CHDS master’s degree graduate, was the face of the Metropolitan Police Department during the ensuing response and media frenzy. Pre-existing, collaborative relationships and emergency exercises were also critical to the Navy Yard Shootings in, Lanier noted. Because of intertwining jurisdiction among the Metro Police, Transit Police, and Park Police as well as with federal partners necessitates the familiarity that is advantageous during an emergency.

That point was quickly proved on the day of the shooting as upon arriving at the scene Lanier was joined by U.S. Parks Police Chief Teresa Chamber and U.S. Capitol Hill Police Chief Kim Dine at the incident command post. Read the full story…