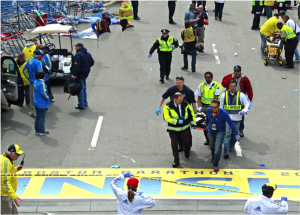 Responders in action during the aftermath of the 2013 Boston Marathon

Race Day 2013
William Evans, now commissioner, of the Boston Police Department was sitting in a hot tub reflecting on his 3:55 time in the Boston Marathon when, about 20 minutes later, a colleague gave him the news.

Two improvised bombs had blown up near the famed marathon’s finish line, killing two while injuring runners and spectators. A stable of Center for Homeland Defense and Security alumni was already on the scene. “We had great relationships ahead of time; that was key,” Evans said. “That multi-agency collaboration is why we were able to respond the way we did.“

On the whole, the CHDS Boston contingent had generally come up through the ranks of their agencies around the same time. Capitalizing on those relationships at the organizational and professional level proved to be invaluable for the response and investigation. Read the full story [pdf] in the Spring 2014 edition of Watermark, the CHDS alumni magazine…